This is part of a series of articles I am writing where I am going through my old list of notes, and essentially adding the little bits and pieces to Affiliate Bible.

Some I had already written while others were just the brief ideas and I thought I should write about them anyway.

You can see more details as to why I’m doing this in Part 1.

One thing that fascinates me is a brand that seemingly can do no wrong. If you don’t live in Canada you’re probably not too aware of Westjet – but they are one of those companies.

I’ve dealt with both companies and I feel both are fine – but the opinion of the masses is that Westjet are the bees knees, and Air Canada are like a cancer flying in the sky. I’ve heard so many Canadian comedians who make Air Canada the butt of many of their jokes – and the audience laugh knowingly every time.

It’s just amazing because for every negative Air Canada news story there’s a negative Westjet one. But you never hear of the latter while the former get people commenting all over the net talking about how bad Air Canada is.

Fort McMurray in Alberta had the crazy fires the other week. This image was shared EVERYWHERE with people claiming Westjet were flying people for free: 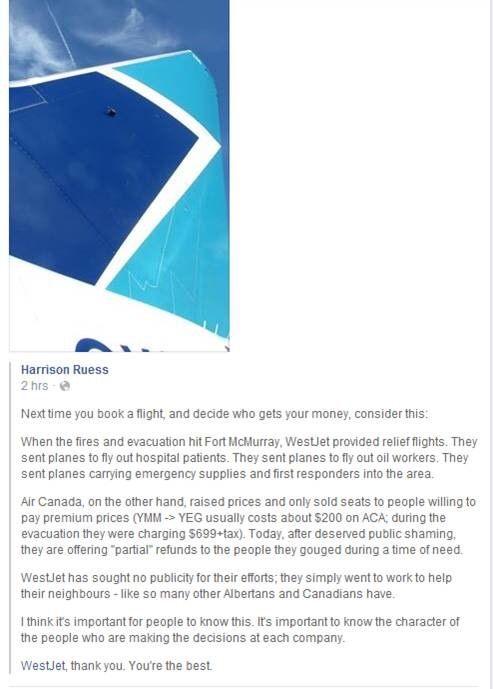 Of course there’s just a couple of problems with that.

(1) WestJet did NOT offer relief flights. Oil companies PAID Westjet to do this. I believe they paid Air Canada as well.

(2) The Air Canada pricing is part of their automated system where it increases the prices of flights due to popularity. They went in and changed that to much lower prices a bit later on due to the situation.

(3) Air Canada provided a refund to anyone who had purchased the flights at the higher price.

It’s just hilarious seeing people have these strict opinions. Here’s one Global News Article on it where you can read the comments of people just RAGING at Air Canada and refusing to fly with them again etc.

However if you’re ever looking at starting a business that relies heavily on customer satisfaction, studying Westjet and how they do everything is integral because when it comes to customer popularity, they do an incredible job.

They’re ranked #3 in the Best Canadian Brands ahead of Tim freaking Hortons!!!

I’m sure I’ve said this before – but one thing I find very easy for writing content at times is to essentially write like a robot.

Over at SportsBettingTips.org we have a big Euro 2016 Betting section going on. We’re going to be doing match betting tips for every single game in Euro 2016.

Now that’s a lot of work. I mean just for the first games of each group that’s 12 individual betting articles and 36 articles just for the group stage. So that’s why the first thing I did is come up with a template. Hell here it is:

(Introductory paragraphs. For Game 1s, cover how they got to Euro 2016 and if there is anything notable about their squads. For Game 2s on wards, focus on past Euro 2016 games. Mostly factual and non-opionated. End it with focusing on their previous history between the two).

Sticking to that very easy template makes it so much easier for us when it come to writing. Basically you don’t have to use your brain as much. You’re not stretching to come to 400 words or 500 words or whatever special number you’re looking for.

If you write a consistent set of articles for a website on any topic – think about creating a template. It’ll help you out big time, and it’ll also make it a lot easier for any content writers you’re hiring.

Six Bizarre PR Stunts: I can never get enough of reading about crazy PR Stunts companies try and pull off.

Restaurants Remove Dollar Signs: I love stuff like this so much – it’s the small things like that which I find so great about marketing and selling etc and it’s the type of thing I’ll put into A/B testing constantly.

When We Were Small: The Under Armour Story: Love stuff like this – you sometimes forget that companies like Under Armour didn’t just step outside one day and dominate the market. They had to build up from scratch.

FavIcon Generator: It takes mere seconds to have a set of favicons for your wesbite which will work on Windows, Android etc. If you don’t do that on your sites then do it. Anything to att to an identity of a website is a good thing.

I subscribe to my local newspaper, and also Texture(Netflix for Magazines). One reason for that is after I read them I like to sit back and think “What ads did I see that I can still recall?”. Of course a lot of advertising attacks your subconscious so you can’t recall many – but it’s cool thinking of the notable ads and it helps.

This was one I saw online which is money: 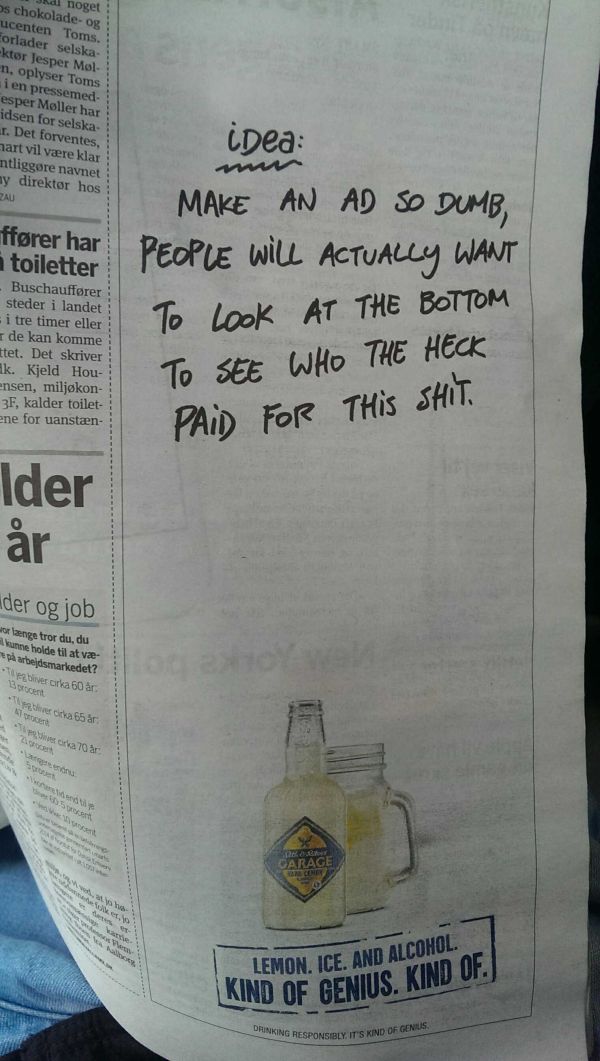 It’s nice when marketing ideas come from spending a buck on your local newspaper.

Something that surprises me is when I hear people talk about revising a website or rewriting their reviews- and they just delete all the old content.

Sure that’s fine some of the time – but not ALL the time. I mean what you’re essentially doing is removing content that can help your website in search engines and also content that some people may feel is interesting.

I recently purchased a website that had about 50 poker room reviews on it. The site stopped updating in 2012 and everything was outdated. I got it for $50 because it wasn’t doing anything in search engines and the person was going to let the domain expire.

I purchased it primarily for the backlink profile but the content was a nice bonus. I’d much rather have a Pokerstars review which is 1500 words than 500, and I’m able to use those reviews to do just that. It adds something unique and an interesting perspective on a page – showcasing a review from back in 2008. Then you can add additional notes like what’s changed etc. Plus it’s just a cool reference guide.

So before you go through that old content and trash it give it a thorough look – you just might be able to salvage it and use it to benefit your current site.

This article was written on May 23, 2016 however all articles are looked at on a monthly basis and updated to keep them relevant.