(Apologies if you received two e-mails; one was an old one in support of Randy Ray. It seemed to get stuck in the queue for a few people. You can ignore that as his GoFundMe is overfunded and he is doing better!)

I used to really enjoy writing my Thank ____ It’s Monday articles on here. There were a lot of little topics I’d compile throughout the week to discuss on a Monday.

Sometimes it was just sharing interesting resources. Other times little bits of wisdom that I had picked up on and wanted to share. Sometimes I just liked to vent.

I’ve entered partial retirement these days, so I have a fair bit more time on my hands. I’m not really motivated to get Affiliate Bible back to where it once was at its peak – although that may change in the future – I do enjoy writing articles on here when I feel motivated to do so.

I thought I would write a T_IM as there’s been a couple of topics on my mind lately, and it might encourage me to start writing these on a regular basis.

First the main reason for this article – Statsdrone.

Many years ago, the most important tool for any affiliate that worked with a large number of programs was StatsRemote. If you’re a new affiliate you won’t know what that was; but back in the day, we all worked with between 50-200 different affiliate programs.

It was a real hassle attempting to keep up to date on your stats on a regular basis. Imagine logging into 200 affiliate programs each day? Madness. Yet keeping up to date on that data is important, as you never know when an article is trending and driving real money players.

Unfortunately, they closed many years ago. There have been a few similar products that have entered the space since the Statsremote closure. The two most well-known products are Voonix and Nifty Stats.

Neither of those fit the bill for me. Don’t get me wrong Voonix is incredible at what it offers – but the cost was just too high for me. 525 euros per month just so I could track the 20-30 programs I work with just didn’t seem worth it for me, personally. NiftyStats I tried but just wasn’t a fan of the interface. It felt very clunky and outdated.

Now I know the owner of Statsdrone, but that is not influencing my opinion or recommendation of it in any way. As a matter of fact it soft launched in July 2021, and I have been using it since then. I provided a lot of feedback and told him back then that while it seemed to fit what I was looking for in this software, there were a lot of little issues that needed to be ironed out prior to me ever recommending it.

6 months later, I’m happy to sit here and recommend it openly and honestly, as for me anyway, it does exactly what I want in this type of program.

I have slimmed down the affiliate programs I work with these days. I work with just 15 programs regularly, have another 20 that I sporadically promote, then older accounts I don’t promote anymore but would love to keep track of.

I’m able to do all of that with Statsdrone. All of the gambling programs bar 1 that I work with, are available within it. It was very easy to connect my accounts to it, and then I just log in each day, click “Sync” and within a minute or so, get the reports of how I am doing at over 50 different programs.

It’s also both made me money, and saved me from losing any more money.

Here are just two examples of that, and a big motivating reason for me to write this article.

The US Open: I happened to check my stats at lunchtime on the day before the US Open. I was stunned to see that an online sportsbook, which I don’t promote too often due to bad retention, had gone from 1-3 signups per week to over 80 in the last 24 hours.

I dived into the data and realized that one of my articles on telling people where to bet the US Open was trending, and sending conversions. I was able to quickly update that article, point people to a better sportsbook for retention, and send over 400 new first depositors to that sportsbook with excellent retention. On top of that, this sportsbook had a promotion that month and the most first depositors received a $1500 prize, which I won.

That was ALL thanks to Statsdrone. 100% Statsdrone. If not for that, I would have not checked that poorer affiliate programs statistics until the 1st of the next month, and it would have resulted in a wasted opportunity.

Rogue Unnamed Sportsbook: I cannot be bothered with any drama these days, so I am not going to mention this online sportsbook by name. Rogue Sportsbook is an online sportsbook that I have promoted sporadically in the past. Only when they offer the best odds when it comes to specific NHL games I am tipping. I’ve never really made money there so I rarely paid them any attention. I would log in once per month, see my balance at $0 and basically forgot about them.

Well when I was adding programs to Statsdrone, I added Rogue Sportsbook as well. I was stunned to see that it listed gross revenue for the past year at $27,000 when I had made exactly $0 from that program.

I logged in to check the balance – still $0. I dived into their data more and confirmed that yep – I had been sending them depositors every month, and in 2021 they had racked up $27,000 in revenue. Yet I received $0 from them.

I got in touch with them immediately and figured out what had happened – they had retroactively changed their terms and conditions. They had some insane new rules like you need to send at least FIVE depositors per month for three months just to get a small percentage of what you earned. If you don’t do that, you earn 0% of net revenue. Did they notify affiliates of this? You know they didn’t.

An absolute freaking scam. But you know what? While I was furious about this – and they were unwilling to work me at all on it – it was again thanks to Statsdrone that I discovered this. Because if not for Statsdrone, I would have continued sporadically promoting this sportsbook for years. Instead, I was able to discover this, remove them from all my properties, and warn my players about it and inform them they shouldn’t play there.

Man I did not mean to go in about all that – but I just wanted to highlight two big reasons that I am thankful for Statsdrone.

Here are 5 quick reasons and features to give Statsdone a try:

Man – I REALLY did not intend to write so much about Statsdrone. That’s why I love writing on here though – I’m always so passionate about it, and it just keeps flowing.

If I do a future T_IM I’ll touch on some more topics in detail. So just a few quickies to wrap it up.

One company that I have been studying during the pandemic is Peloton. It’s fascinating seeing how their business model works etc and it’s neat to look at it in hindsight.

Do you go to lunch or dinner with people who also run their own businesses and websites, or do affiliate marketing? Then make Peloton the next discussion topic.

Yet as I write this, they have dropped to as low as $24 in the past week.

Like I said – make this a discussion topic. Put yourselves in their shoes. There’s a lot more to it but it really doesn’t seem that they had much foresight. It was like they thought the pandemic traffic and popularity was going to go on forever and they expanded. Now they are laying thousands of people off.

You can learn a LOT by looking at businesses like this, and decisions they made and deciding how you would do it differently.

The Success of Wordle: 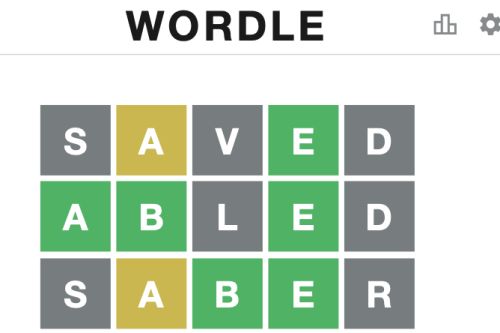 I expect most of you know about Wordle. It had less than 100 playing the game in November 2021. By the end of January, it was being purchased for $3 million by the New York Times.

There are a variety of reasons why this took off. Just a few of them:

2: Only One Per Day. I love word games. I’ve downloaded lots of apps or visited lots of word game websites over the years. I’ll sit there and play for a bit then stop. Why? Because there is no end goal really or nothing to keep me hooked. The creator of Wordle showed a lot of restraint by only having one game per day. They also wouldn’t let you go back and play previous days’ games. This stopped oversaturation or boredom and was the real magic behind the game.

3: Routine. Tied in with #2 is routine. With only one game per day, it has become part of everyone’s daily routine. My son, who stays up late, will play it as soon as midnight hits. My wife will play it after dinner is over. I go through my e-mails in the morning, then play it right away. It becomes part of your life.

A lot of those can be incorporated into all the work we do as well. A lot of what I do is broken down into routines, and I feel that helps. People are used to my NHL Tips getting e-mailed to them at 9am EST each day, or my Golf tips e-mailed on a Wednesday. They’ll lookout for it. They’ll e-mail asking about it on the odd chance I am late. Heck one newsletter I do on the 1st of the month – I didn’t get to it until the 3rd of this month, and I had over 50 e-mails from people asking about it. Because it has become part of their routine.

I’ll finish this article off with some interesting reading. Surely I’m not the only one that is fascinated by casino complaints, and the stories behind them. Sometimes it is the casino messing about, other times it is the player who is trying to scam in some manner.

ThePogg has a massive complaints section that I browse on a weekly basis. They also have this very impressive ADR Report covering a year worth of complaints and shows what a great job they have did dealing with this.

Just wanted to highlight that for them as they do a great job. While there, be sure to browse that complaints section. It makes for some fascinating reading.

Well I hope you enjoyed reading this even half as much as I did writing it. Hopefully, I will get in the habit of writing more of these articles in the future. I work a maximum of three hours per day now and I’ve spent most of that writing this article – so guess I’m off to play some XBox!

This article was written on February 21, 2022 however all articles are looked at on a monthly basis and updated to keep them relevant.