Not sure if I should be thanking Roboform or Statsremote actually – both programs have made for a couple of good weeks.

For those unfamiliar with Statsremote – it was a program which would log into all the affiliate programs for you, and display all of your earnings on one page. It was great when you had like 200+ affiliate logins as you didn’t have to check them regularly.

Unfortunately the owner of Statsremote fucked off into oblivion a few months ago and the program stopped working completely.

So I decided to take this time to go through my Roboform passswords of which I had something like 3700 entries. I wanted to clean them up, organize my affiliate program bookmarks and figure out who I’m promoting and where, and what links are old and need to be updated etc. Sort them out by programs I promote regularly and should check stats on a weekly basis, or programs where I should only check monthly as I rarely promote them etc.

It was a big job, and man – parts of it were depressing. Do you know how many affiliate program logins I had where the program had just up and closed and ran off with everyones money? Way too freaking many. It really made me feel a bit nauseated about the whole affiliate thing – just going through my list and seeing hundreds of logins which no longer worked.

However there was also a delightful bright side – finding money I didn’t know existed.

It was like digging through the couch for change and pulling out a fresh $5 bill. Some of the amounts were crazy. It’s funny because it is money that has just added up over the years – nothing big. Every month there’d be like $2 or $10 or whatever. On a month by month basis it seemed like nothing.

However it’d all add up and I was finding $1800 at one place, $1200 at another etc. There was one brand where I found $170 but their minimum cashout was $200. So hell may as well start promoting them. I pushed them in a key spot for a few days and what happens? They end up working out to be a great converter. When prior to that I was sending exactly 0 traffic per month.

So if you have tons of old affiliate logins that you haven’t checked in awhile – take some time on a quiet Sunday to go through them. You may be surprised by what you find.

One thing I’ve thought about doing due to all the sites I’ve run is starting a log. Basically noting changes I’ve did to specific sites, any issues I had I overcame etc.

If you’re just starting out it might be pretty helpful to refer back to. Just a couple of examples:

– I had an issue with a site recently where pages weren’t overriding the category on WordPress. I’ve had this issue a few times over the years. If you ever ran into this problem you’d know that there’s various solutions – some of which will work and some won’t. Honestly seems random. I have found one proven method that works however when the issue cropped up I completely forgot what the fix was. What should have been a 5 minute fix resulted in 30 minutes of trial and error. A log of that issue and how to resolve it would have fixed it.

– I currently have an issue with a site ranking well in Bing but not in Google. I ran into this problem with a website years ago. However for the life of me I can’t remember what site it was and if that ever resolved itself or if there was something I had to do. It’s very frustrating because if I had a log I could go look and see that time would solve it maybe. Instead I’m sitting here questioning drastic measures etc.

I mean maybe you have a great memory and don’t need something like that. I have a crappy memory though so it’d be bloody helpful for me.

One thing I am experimenting with at the moment is social blocking over at my Golf Betting Tips Website.

Rather than see the actual golf tips, this is what they see: 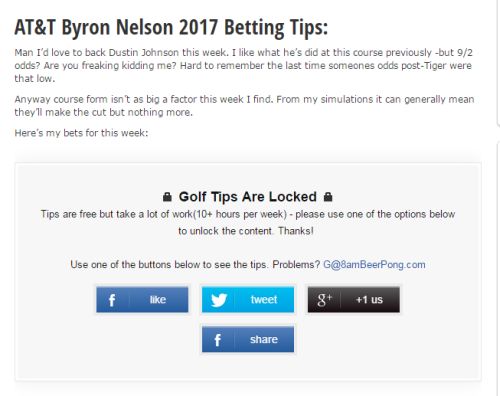 It’s pretty neat. I mean there are ways to circumvent it but it’s working out as I hoped. I’m seeing a lot of likes, tweets, +1s and shares.

It was an interesting decision to make to do something like this.

I studied the site during the website audit. It seemed there was a core group of people who would visit every week and a few from search engines. The conversions were pretty low with most people having accounts already.

I decided that what I wanted with the site was more traffic – and to do so socially. So I started to push social sharing but people just wouldn’t do it.

As I was putting work into the site and really not getting a decent return income wise I decided to go this route. I was tempted to sell my tips as my records pretty sick but that puts on pressure that I just don’t like.

What really surprised me was seeing zero complaints from people. Over 400 people have seem the social blocks so far with 60% interaction with in. I’ve received not one complaint.

Anyway that’s it for me this week.

Feels good blogging here again hope to keep it up.

This article was written on May 29, 2017 however all articles are looked at on a monthly basis and updated to keep them relevant.