I’m thanking Victoria it’s Monday because it is Victoria Day here in Canada.

Honestly, I had to check Wikipedia just to see what that actually means. All I know is it means a day off from school and work. I guess it’s Queen Victoria’s birthday – so we celebrate that. Ok then.

My knowledge of history is absolutely shocking, to be honest. It’s just a topic that’s never interested me at all.

I took history class for 4 years in high school, and honestly from those 4 years I only have one memory: BOOBIES.

I was probably 12-13 at the time. Our history teacher put on this video – I guess depicting the old days back in caveman world or something. All I remember from that is all of the girls walking around in that video wearing leaves to cover their nether regions….and no top.

I still remember the disclaimer our teacher said before putting the video on: “You’re going to see girls with no tops on in this video. Hopefully, you can all be mature adults about this.”

I got kicked out of the class because I couldn’t stop giggling.

Seriously – how could you not laugh? THERE WERE BOOBIES!

On A Sidenote – Fuck Hostgator

For having a large downtime for the 2nd time in a month, meaning I had to post this article one day late. I’ll have more on that in the coming weeks.

This was from a few weeks ago, but I wanted to share it. In the newspaper there was a March Madness bracket. I practically stopped, put down the newspaper and gave a slow applause when I saw this ad: 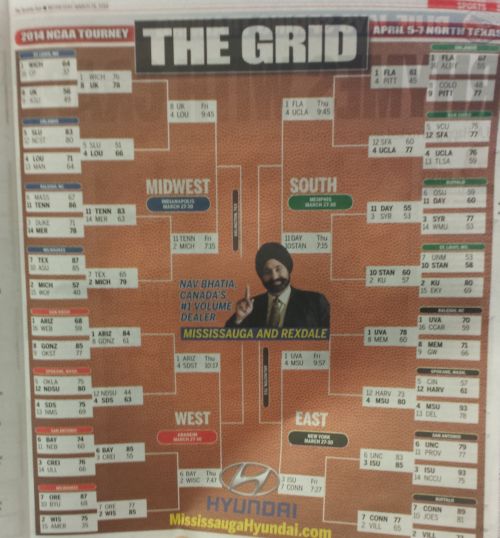 I mean look at that freaking ad – right in the middle of the bracket. This may be the best advertisement I’ve seen in a newspaper ever. The greatest thing about that ad is that people use this bracket. People use it constantly. I saw multiple businesses and pubs who had cut out that bracket, and displayed it on their bulletin board or on their wall. All while giving this guy additional advertising.

It’s something to think about – and I’m not just talking about sports. Look around you wherever you go – look at what businesses post on their walls etc. Think about what your friends have printed out – either on their walls or on their desks. Schedules, that sort of thing.

For example – years ago, I used to rank #1 for “printable bingo patterns”. People would want to print off bingo patterns to play in their home or something, I guess. So I’d create a bunch of them, and then slap my website address on them as well. That was okay – but then I went further. I’d promote $10 free at Bingo Gala, and then provide my bonus code to use. Or send them there via my affiliate link. I’d get a bunch of signups for that.

So there’s two lessons you can learn from the above advertisement. #1 is the actual placement of it – it’s not just on the same page as the bracket or whatever – it’s right in the middle. It’s presented in a place where you can’t help but see it, where all eyes will always gravitate to it. That’s beautiful.

Second – think about providing a valuable resource for people that also benefits you. That’s the best way to go about it. Stop, and take a look at your website and think “What can I do that would benefit these visitors?”. Then when you’ve did that, think about how you can work it so it benefits you too.

Most affiliates are too focused on one thing: getting users in, then pushing them off to whatever online casino they can. There are so many ways to do something that benefits a user. A “Blackjack Cheat Sheet” for example – that also mentions a no deposit bonus at one of your affiliate casinos. Or poker hand rankings in printable format.

So many opportunities to get your promotions in peoples houses and pockets.

If you’ve read anything about social networking before – you should have read that “Timing is Everything”. For example if you are posting links to your Twitter account or Facebook for your website – you should focus on posting it at the best “time”.

Some of this is obvious. It’s probably best not to post it at 4am for example. You want to post it when people are hopefully going to see it at the top of their feed.

This is something though where enough people don’t split-test. They automatically assume “during the day” or they pick some arbitrary time and go with it because….I dunno, because they just don’t feel the need to actually split-test something like this.

You really should though – because sometimes the results will surprise you.

One website I run is “Thong of the Day”. Every day, a new picture of a hot chick wearing a thong and nothing else is posted. So when I started the site, I went with evening postings.

Our audience was mostly North American, and my thought process was they wouldn’t want to see pictures of chicks in thongs while at work and scrolling down their facebook feed. Better when they are done work, and sitting at home with a bottle of vaseline and box of kleenex within reach.

The results were….okay. We were reaching maybe 25% of our audience. I split test this though. I started doing posts during the day instead to see how that would work out. It was around the same – 25%.

The next test was to put them in the morning. Around 9am-10am EST. And holy crap did that ever change everything. We were now reaching over 50% of our audience on a daily basis – sometimes as high as 85%. Every post was now getting “Likes” and some “Shares”, and we were getting comments.

Could be a lot of reasons for this – maybe people check their Facebook before they go to bed for example, then when they get up they check it and there’s not many posts so ours is always there to see. But my job is not to question why – it’s more to find out WHEN, so I get to know a lot more about my audience and can market to them better.

Anything you do on a regular basis – stop and think: can I split-test this? If you can, then do it. You just never know – the results might surprise you.

This article was written on May 20, 2014 however all articles are looked at on a monthly basis and updated to keep them relevant.