This week we are Thanking Feeny It’s Monday.

By “Feeny” I am of course referring to the man that guided Cory, Topanga and Shawn through Grade School, High School and even College in the awesome TV show Boy Meets World. 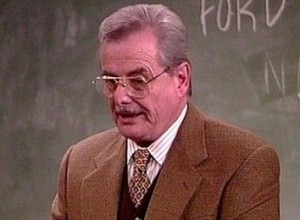 Thanks to that guidance, Cory and Topanga got together, stayed together(well, eventually) and become parents. The sort of parents that get to have a sitcom around their lives! Just a couple of weeks ago, Girl Meets World was announced, a quasi-sequel to Boy Meets World. Sadly it is more of its own show – but they can’t keep Feeny away for long.

Seriously, you have no idea how freaking pumped I am about this show. I felt the same euphoria that I felt when Netflix picked up Arrested Development.

During my teen years, I was into the punk scene. And I still have fond memories of those Friday nights. Prior to heading out to a club to jump around in the mosh pit and beat the crap out of each other, I’d force my friends to sit down and watch Boy Meets World while we pre-drank.

Amazing news, and I haven’t stopped smiling since. Let’s get rolling…

Productivity Tip of the Week:

I’ve written about this before – how on a regular basis I like to go through some of my quality websites like CasinoAnswers.com and lengthen an article. I’ll usually pick an article at random and add 100-200 words of relevant quality information on it.

We had purchased a couple of websites and had Casino Answers “eat them up”, so to speak. When we did that, I noticed there was a lot of content that was very short – only 100-300 words in length. So what I did was make a list of all of those articles – about 300 in all. Then every morning, part of my morning routine is to pick one of those articles at random, and turn it into a quality article of 600 words or more.

The whole process takes me maybe 20 minutes, and MAN does it feel good after it. Basically the very first thing I’ve did all morning is super productive, and it’s a great start to the day.

I’d recommend trying that – finding something you can do first thing in the morning to really get the ball rolling. It makes all those massive to do lists look a lot less daunting when you accomplish something immediately upon sitting down.

With this being a TV inspired T_IM, I thought it might be fun to add a new monthly section where I talk about any form of media that kept me entertained over the last month. When I work, I always have the TV on. It’s usually on a sports channel but if it’s tedious work I’ll have a TV show on. I usually have my Kindle nearby or my XBox on too – then if I need a quick break from work I go play video games for 10 minutes to recharge.

So the first week of every month I’ll do this section on AB:

And that’s what kept me sane through November, and a little bit of December. Feel free to post in the comments with what you’re reading, watching or playing.

One thing that never fails to amaze me is how easy the media manipulate people. And they do it in a manner that makes them more money too, whether it is pageviews or buying their newspapers – people just can’t resist.

I mean just go to your local grocery store and look at some of the ridiculous headlines on one of those celebrity magazines. Yet people buy it because of that crap!

Seriously, the majority of people are just complete fools, and it really makes affiliate marketing so much easier. “Controversy Creates Cash” has never been a truer statement.

Take this week for example – it was announced that Kate Middleton was pregnant. Practically every news site or newspaper had this as their headline.

HOWEVER – every single one of these sites also had the sub-heading: Princess in hospital for morning sickness.

Now if you actually READ the article you’d know it wasn’t just morning sickness – it was a bit more serious than that. It was Hyperemisis Gravidarum. Of course, people are idiots who can’t take two seconds to actually read the details behind something, so every web article on the topic was littered by comments of people raging about this, and how they had morning sickness and never went to the hospital. All falling for the medias trap, which is to get them to add to the site as well as interact with the site, and also come back to the site. Plus then you have people who DID read the article in the comments arguing with them – exactly as the sites wanted them to do.

Another example of this was this article about Liam Ridgewell. To quickly sum it up – West Brom Football Liam Ridgewell made a bet with a friend. The friend lost and had to give Ridgewell money. Ridgewell, to taunt his friend, took a picture of him pretending to wipe his arse with the money.

That’s the actual story. No big deal, right? Yet the media version is slightly different. Let me bullet point the article for you:

What’s the point of this? To get people to share the article, as well as comment on it etc. And guess what? it worked.

Time and time again people get manipulated with ease. Really – pick up a newspaper or log onto a news website and just look at the way the majority of the stories are tilted – to raise controversy, and get people talking, sharing and viewing.

Of course I’m not complaining – with people like that it makes marketing a LOT easier. And don’t worry – they’ll never smarten up. You can run this type of marketing into the ground, and people will still swallow it hook, line and sinker.

Bleacher Report is living proof of that.

Awesome Marketing Video of the Week:

Major props to Microsoft for this ballsy video for IE 10:

I love it. That’s just fantastic marketing for about a million reasons, yet it’s also so basic. They picked a portion of potential customers – the ones that used to use IE and have now left – and really targeted them by learning about their problems with IE and presenting it in a humorous fashion, manipulating their mindset along the way.

Motivational Video of the Week:

It HAS to be from an episode of Boy Meets World of course.

If you want you can watch the full, awesome episode:

Or just skip to the motivational lesson learning climax which is at 18:08 and watch the last few minutes.

The theme of it is simple: Nothing Is Impossible.

Then go do it.

Now if you don’t mind, I’m off outside to scrape my car. We had freezing rain last night, and the car is just covered in it. Of course I’m not worried – I’ll be able to scrape it all off. Why? Because nothing is impossible.

Sometimes it’s just a pain in the ass!

This article was written on December 10, 2012 however all articles are looked at on a monthly basis and updated to keep them relevant.