Today is the first day of the Christmas holidays being over with, which means the kids are back to school. More importantly, it means there is such a thing as “time to go to bed” in my life again.

I know a lot of affiliates who are single or don’t have kids and generally don’t have restrictions like that and man – I am glad I am not them. I know many of them who handle it fine – but others who don’t. They’re self-declared “night owls”. I’ve been there and I know what it’s like to get that late night motivation – but man, I am glad I am forced to say “Nope” and stay off the computer.

I used to be really bad as a kid with staying up, and as an adult I’ve never really shaken it. I remember as a kid staying up until I literally passed out at around 4am, while playing Championship Manager on my Commodore Amiga. Over Christmas break it was the same – the “one more chapter” syndrome caused me to read about a book a day, and I got into Championship Manager(now Football Manager) and there were a few more late nights due to the same “one more game” syndrome.

So yay for actual regular bedtimes and getting into bed by 9pm. Love it.

At least until NHL Playoff season rolls around.

Completely forgot to thank Sports Interaction for the bottles of wine they sent me at Christmas: 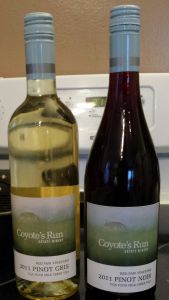 Sports Interaction are a great company. They’re pretty much focused exclusively on Canadian traffic – and it’s to the point where I’d say I direct 95% of my sports betting traffic to them. If you have any Canadian traffic, consider geo-targeting and promote SI to them. They’re really nice guys too and very responsive. If you’re Canadian head over to BetNHL.ca and you’ll note that the majority of the text links lead to SI.

I always like those little tokens of appreciation. I never expect anything and when I do get gifts from affiliate programs it’s a pleasant surprise. Increases loyalty and it’s always cool to be able to tell people you got some free swag for simply being good at your job.

Anyone read about this? Good article over at Techcrunch on it.

This one was a real head shaker. Rap Genius have great rankings and then they basically asked bloggers to post like 30 links on their webpage and in return they’d tweet their site out to their followers.

Always interesting studying the fallout of something like that. They’re back in now and look to be #1 – but they’re lucky they’re so big and were able to communicate with Google.

The majority of websites would be screwed.

I was talking about my bedtime above and being a night owl and so on. One weird concept I dig that is based on having a routine is “cheat time”.

A lot of people find they are more productive at night, and will work really late till 3am-4am. I think a lot of that is because they are “cheating” – they are working outside the norm, as we’re conditioned to be 9-5ers. While everyone else is asleep, you’re working and you’re at your most productive.

But it’s outside of that routine where I find I am my most productive.

If I get up at 5am? I’ll often work until the kids get up at 7:30am. If the wife and kids go to bed early? I might sit down and do work from 8pm-9pm. If the kids head off on a sleepover on the weekend, I might squeeze in a few hours that I normally wouldn’t.

And that’s when I’m most productive – because it feels like I am “cheating”. I am using extra hours that I normally wouldn’t have to get work in – and I’m extra motivated, and trying to cram as much work as I can into that time because I know it’s limited and must end.

If part of your resolution for the year was getting more structure in your work life or a set routine – do that, then try and squeeze in some extra hours where you normally wouldn’t to work.

You’ll be surprised just how productive you’ll find yourself.

Motivational Quote of the Week:

“Do something today that your future self will thank you for.”

Saw that quote on my Twitter today and I really dug it – mainly because it can apply to so many things like life decisions and of course, work.

Say you were pondering a move to a new country, or to have another baby, travel for a year or to go back to school. Usually you’d sit there weighing up the pros & cons, having internal arguments with yourself and having this decision consume your whole thought process. This simplifies it: instead just think of yourself 1, 5 or even 10 years from now and ask: would future me be glad that I did that?

Work wise, it can get you over a hump. Wanting to build a new website but don’t have the motivation? Or add content to a website but just can’t be bothered? Won’t the future you be happy that you’ve either added another income source, or helped stabilize an additional income source?

You don’t even have to look that far into the future either. Feel you should work out but too lazy? Won’t the person you’ll be 2 hours from now be glad that you worked out, and feel great? Not feeling up to work today? Won’t evening you be a lot happier knowing they had a productive day?

Something to think about. Have a great week.

This article was written on January 6, 2014 however all articles are looked at on a monthly basis and updated to keep them relevant.