In the first article I explained that I have a big list of notes for blog articles here or bigger articles stretching back years.

However due to time constraints I never got to them and now I’m not really “feeling” writing an article on the topic, or the information is a bit outdated.

Either way rather than waste all of that work I’m compiling it in posts here. Some of it was already written a few months ago, others the idea was written down but nothing else and I liked it enough to whip something up for these posts:

If you upgrade to WordPress 4.4 or 4.41 then when you go to install plugins you get an error like this:

That’s the geniuses at WordPress at work. It’s been an issue for the last few updates and they haven’t fixed it yet.

Here’s how to fix it:

I intially wrote that after WordPress 4.4 was out however from what I understand it’s still not resolved.

Something I find funny these days is any new idea is met with scorn. I mean look at the virtual reality stuff – HoloLens at last years E3 demonstrating Minecraft. Holy crap were people raging at that concept thinking how stupid it looks. And yet fast forward to a year later and virtual reality is in a lot of homes these days and is becoming a standard feature in new smartphones.

Anyway one thing I love to do is go back in time and look at things that are massive and we take for granted today, yet back in the day were also met by ridicule.

For example here’s a few opinions when Apple first announced this crazy new thing called an iPod back in 2001:

Sounds very revolutionary to me. 😡

hey – heres an idea Apple – rather than enter the world of gimmicks and toys, why dont you spend a little more time sorting out your pathetically expensive and crap server line up? 😡
or are you really aiming to become a glorified consumer gimmicks firm? 😡

I still can’t believe this! All this hype for something so ridiculous! Who cares about an MP3 player?

I’d call it the Cube 2.0 as it wont sell, and be killed off in a short time…and it’s not really functional.

See more of these Here. It’s good that in 15 years the internet hasn’t changed much – morons are still ready to viciously attack anything and everything with negative opinions right off the bat.

The Shit I Sometimes Write:

It’s a running joke between me and my team that some of the notes I write are just the worst. I’ll write a note down for something I need done and then we’ll revisit it a month or so later and have zero idea what the hell it was.

Here’s just one such random note found on my “Affiliate Bible Article Ideas” To Do List:

Uh okay? I guess it was meant to be comparing the security of both. Not sure what the purpose of that article was and not sure why I just randomly decide to start listing Skype etc at the end.

More importantly, the evolution of Clickbait.

In the beginning, Clickbait was reserved for methods like this: 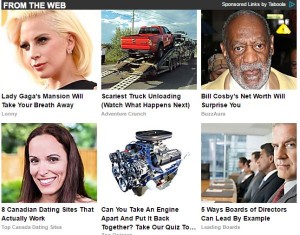 Seen at the bottom of a news article.

(That’s actually not the image I initially used for this article idea. That’s a more tame version but you get the idea. I was cleaning my system last week and though “I’ll never need this image!” and I’m too lazy to get my backup drive just for that.)

I mean look at what they went with:

Each one of those should tell you a lot about human nature. For example the “10 people who used to be beautiful” one that I said was laughing at ugly people – it’s actually a lot more than that. It’s all about gossip. So you look at these semi-famous people and what they once looked like compared to what they look like now – and you share it with people. And for every 10 people you share it with, another will probably share it as well.

Of course it’s incredibly oversatured now thanks to the likes of Buzzfeed, which has fast become a parody of itself. And now it’s going to be interesting to see what happens to Buzzfeed over the next little while. They’ve got BuzzfeedNews going and are trying to create a bit of a different identity.

I have a feeling they’re going to be a very fun case study in a few years.

One thing I – and a lot of other people I’m sure – used to always complain about was a lack of time. I’d dream of the day I could just stop time and get caught up on everything I was behind on.

As I mentioned last week I’d got all caught up on my to do lists for the most part – and I’m almost at a stage where I am ahead of the game. It’s been a very productive last few months for me.

One of the biggest aspects of that is my ability to “cheat time”.

I wrote about a new routine I started earlier in 2016 but it’s basically a 9-5 schedule.

That’s it. Then I’d crack open a beer dead on 5pm every day and I’d be done work for the rest of the day. That would be Mondays-Fridays and on weekends I’d do my daily to do list each day and that’s it.

However I wake up at 5am-6am every day. So there’s a few extra hours where I do a lot of work and most days my daily to do list is finished before 7:30am giving me the entire morning free. I watch a ton of sports and while it’s nice at night to relax and flick back and forth between NBA & NHL, I’d sometimes pop on to do work then. Weekends I had no work plans but I’d often pop on to work – especially if the house was empty and there was a 1pm NHL game on or something.

All those extra hours basically made it feel like I was “cheating time” and guess what? I was a hell of a lot more productive during those times.

So if you’re struggling with productivity at times give that a try – set a regular schedule where you HAVE to work, but then a few areas within there for bonus time to do what you want. When you actually WANT to work and CHOOSE to do so? You’ll most likely see your productivity increase tenfold.

This article was written on May 16, 2016 however all articles are looked at on a monthly basis and updated to keep them relevant.