The reason for that is there pretty much is an app for everything. And if there isn’t? Great – another potential business opportunity for me!

But seriously – it’s so cool how the world of apps has evolved over the years. It’s amazing to think back to the early days of apps, and how Blackberry didn’t fully adapt to them. Now look what’s happened to them.

I got the inspiration for this article last night. It’s been a long, tiring weekend. My daughters birthday party, going out to see Jerry Seinfeld perform, the NHL playoffs, various other sports and family activities – come Sunday night I wanted to just sit my ass down, drink a couple of beers and watch the Cavs vs Warriors.

My immediate thinking is “there’s gotta be an app for that”. 45 seconds later I’ve got an app running which has over 50,000 would you rather questions in it, all sorted by categories and the ability to filter it to kids only ones etc.

It’s funny too because things like that – the generation growing up won’t appreciate the awesomeness of it. Hell – sometimes I don’t. I mean I use the flashlight app on my phone constantly – yet I never fully appreciate it. I haven’t had to hunt around for a flashlight in YEARS! It’s saved my bacon quite a few times.

So yeah – appreciate apps, and if they are free ones with no ads versions or premium versions – think about how often the apps have helped you.

I’m going to send a donation to the flashlight app creator, and upgrade the reddit app I use 50x daily to premium as soon as I am done with this post.

I just launched two new apps in the past couple of weeks. If you are a trivia buff like me, then be sure to check out the NXT Trivia App and the UFC Trivia App.

Trivia apps are nothing new, but these were spawned the way I think everything should be spawned: when I said “shit, there really should be an app for that”.

I was out drinking with a friend and we were asking each other trivia questions, passing my phone back and forth. I was like “Man, this is stupid there should be 2 player local trivia apps” but when I looked, there was nothing.

So I decided to create them. Along with single player, the above two apps have the ability to play side by side: 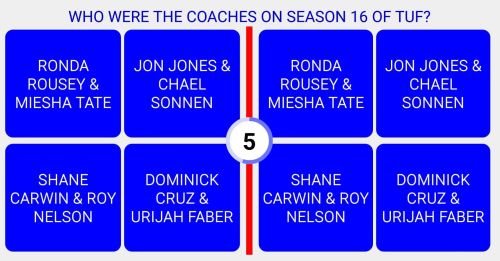 Or across from each other: 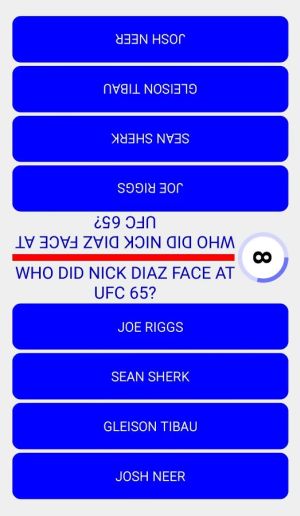 It’s pretty neat and I’ve had a lot of fun doing it with friends. I’m also super passionate about trivia and it’s me practising what I preach – I tell people to always do something they are passionate about when it comes to websites etc as well as provide a useful resource – and this ticks both boxes.

We also used the K.I.S.S. concept with them which is the best way. We’ve got a zillion feature ideas as well as the ideas of allowing people with no programming experience to create their own trivia apps etc with just a few clicks. But we’re starting small – and slowly evolving.

Seeing how this is an app related week, I may as well keep talking about it.

I’ve been an Android user for years – I migrated there from Blackberry OS. I’ve got 5 different tablets in the house all running Android. However for app testing purposes and other things I decided I needed an iOS device – so bought an ipad.

I dig it. It’s quite different and I clearly see the appeal of it. It’s very secure – and for your average person who doesn’t really care about mucking around I think it’s the best choice. Plus the majority of big apps do seem to develop for iOS first.

But it’s interesting seeing the difference in the app store. First from a publishing perspective – Google Play is smooth as a baby. So easy to do, so easy to update etc. Apple however is another beast entirely. There have been a lot of horror stories. I remember years ago it took Trillian forever to get approved. And recently, Pebble had a massive headache getting things approved too.

But where I really noticed a difference was the store from a consumers perspective. It was really interesting to see the different mindsets. With Android, I found that the majority of apps offered a fantastic free version to the point you barely had to pay for it. It was more if you want a no ads experience. iOS meanwhile was a polar opposite. For example I was trying to get a good media player app that could get files off my media server. When I searched for that on Android, the first apps that come up were all awesome, and had me streaming within minutes.

With iOS it was a disaster. The top results for the most part were apps with 6 reviews max. Then when I would try them out they’d be locked down like crazy. For example a folder with 24 video files in it – you could only actually view 5 of them. To view the rest you’d have to pay for the premium version.

Now you might think I’m about to rant against Apple here – but nothing could be further from the truth. Instead, it’s a really cool learning experience about the userbases, and further studying on the topic backs that up. iOS users are more likely to buy apps willy nilly – there is much more of a trust from people. The entire business model on the app store is vastly different.

So if I’m releasing an app on Android – my best tactic is probably to release it for free, and rely on income from ad click-thrus. There is going to be a lot more competition that is free and just as good. However iOS Is a lot more appealing because I can release a free, very limited version and people are more willing to fork over the money for the premium version.

Very cool to see this sort of thing with my own eyes. I’d read data on that before – but it’s a whole different ballgame when you actually sit down and see it with your own eyes.

But It’s Not An All App World

On a final note on this app related post – it’s nice to see we’re actually getting some sort of balance in regard to mobile. This is with google pushing for more sites to be responsive etc.

It used to be the only way I could do a post via my phone was with the WordPress app for example. But now that’s not necessary – the WordPress backend is a hell of a lot more accommodating for mobile users now.

The evolution of apps really is a cool story – and it’s neat to see them finding their own place, and a good balance in the world.

Plus it’s funny – I hear so many affiliates talking about how every website niche is over-saturated. But they’re not aware that there are new websites popping up each day that are bringing in 6 figures overnight because they’re discovering new niche, or bringing something to visitors in a better manner etc. However there’s no really good metrics for something like that.

But with the app world we’re able to see the “next big thing” measured by installs. Every week or so there’s a hot new app making its way up the app store charts.

And if you think the app world is over-saturated and there’s no breaking through with anything new, popular or revolutionary?

Well just ask the creators of Flappy Bird and Periscope what they think about that.

This article was written on June 8, 2015 however all articles are looked at on a monthly basis and updated to keep them relevant.