This week for T_IM I want to have a themed article – Thanking Targeted Marketing It’s Monday.

It is inspired by the story that was leaked this week – the horrific, horrific terrible news that the satanic XBox One will use Kinect to provide targeted advertising.

As you can imagine – the internet is raging about this. Screaming from the rooftops. Hitting up any message board and article comments forum they can to rant and rave about it.

I mean targeted marketing has always been around – but the more personalized it gets, the better.

The biggest issue you hear from people when it comes to targeted marketing is privacy. But really – it’s 2013. There’s no privacy anymore. Let’s not kid ourselves. You – the one visiting this website right now – I already know so much about you. I probably know where you live approximately, what operating system you’re using, what size of monitor you have, how you got to the website, how you actually browsed the website, and so much more.

And I’m just a dude who is writing an article you’re reading – I’m not Facebook or Google, whose majority income comes from knowing absolutely every detail there is about you, and then pushing advertising at you based on that. I mean hey – remember when it was revealed that Gmail would read all your e-mails, and push ads based on every e-mail? Half a billion active Gmail accounts suggest that’s not a big deal. Facebook have been dragged through the mud for YEARS on the personal data they take from you. The result? 1.1 billion active users.

Most people will yell and put up a fuss about privacy. But when it comes down to it they just never do anything about it. If you really want to be private in this digital age you can’t interact with any social website, and you can’t access the web anymore without using proxies(which will also gather data about you). The privacy issue is really nothing more than the latest thing for people to whine about.

A lot of people seem to hate advertising. They talk about the PVR being a “godsend” because they can skip commercials. Are commercials REALLY the spawn of satan himself?

Advertising brings things down in price. Not everything, but a lot of things. TV shows and movies have large fundings from advertising companies for example. If they had no advertising in them, would basic cable still be so cheap every month? (The BBC license fee of £145.50 suggests not).

Think about all the free apps you download for your mobile phone. Think about all the websites you visit every day. If they weren’t making income from advertising, they’d actually have to charge money for apps, (And the ratio of people who purchase an ads-free version of an app is incredibly small) or charge money for visiting their website. TheOnion.com went with a paywall in 2011. Their traffic took a big drop after that(based on Alexa stats and Google trends) and I’m sure a large percentage of the people who still visit the website, do so by circumventing the paywall.

That’s just one of many reasons why advertising is good – because it brings us awesome shit for free or cheap!

Of course you’re all marketers or wannabe marketers – so I really hope I’m preaching to the choir here.

Here’s one of the main reasons advertising is bad: because it’s so bloody vague!

I don’t watch much TV – so I’m not sure just how horrible the advertising is during Seinfeld reruns etc. I mostly watch sports and I’m fed the same sort of ads over and over again. All ads that are catered to the general demographic of people who watch sports.

Most of them are useless – and repeat constantly. Video game ads. Beer ads. Ads featuring supermodels in bikinis that I never have any idea what the product is like. Car ads.

I mean look here’s a quick example. I logged onto my XBox and this is the home screen – the first thing I see while logging in: 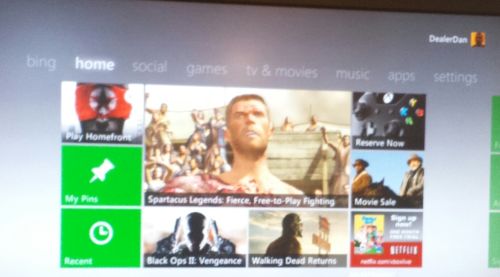 See that bottom right advertisement for Netflix? Absolutely useless. Why? Because I already am subscribed to Netflix. I have the bloody Netflix app installed on my XBox and the family watch it often – but with Microsoft not currently incorporating targeted marketing based on personal data, it’s completely wasted on me.

That’s why I like targeted marketing based on your own data – because it’s solving that for us! Advertising is always going to be around – so why shouldn’t it be something that is actually USEFUL for us?

The More They Know About Us, The Better:

To stick on the Netflix train a bit – ever sign up with Netflix? First thing they want you to do is ask you to rate movies you’ve seen. Why? So they can tailor the homepage selection to your general likes. When you watch movies on there? They use that to offer you additional selections.

Are they doing that out of the goodness of their hearts? Of course not. They’re doing that because they want to keep you subscribed, and keep giving them money each month. But they can only do that if they offer you value of service. And they can only offer a valuable service if they know as much about you as possible.

That’s obviously not a coincidence. Based on my browsing there previously – they’re notifying me that Freshbooks has a Facebook page, and is suggesting I like it.

That’d creep a ton of people out. But I LOVE it. It’s so convenient. They’re helping you. They’re saying “Hey we noticed you checked that site out – want to keep up to date on it?”. There’s nothing wrong with that.

Come to think of it – I ended up hitting up Taco Bell that day. Bloody subliminal advertising.

So Back to Kinect:

Whew – sorry. I could just go on and on about advertising and how awesome it is. I love it, and it makes me sad when people use adblock programs or talk about how much they hate advertising. That’s why this new whole personalized advertising thing is so awesome – because it’s making advertising relevant again and even more of a resource than ever.

Anyway – I hope Microsoft go the whole way with Kinect. There’s such a great opportunity there. I’m sure it’d creep some people out – but there’s so many cool things they could do. if I’ve been playing XBox all morning and it’s approaching lunchtime, take a screengrab of me sitting there but add a taco bell bag and a pepsi drink on a table beside me. If I’m sitting there wearing an Inspector Gadget t-shirt, show some 80s retro ads, or notify me that Inspector Gadget is available on Netflix or Bing Video or something. Take it further – store that information, and on the off chance that I’m ever using Bing – throw ads to me based on that sort of crap.

Time To Get Off My Soapbox:

I’ve had this (in a much-lengthier) discussion with some friends over the past week – so I really just wanted to get some stuff off my chest. Thanks for listening!

I’ll end on a humorous note though. I was discussing this yesterday with a friend, and a friend of his, Jake. First time I met Jake. Jake was raging hard about the whole XBox thing and privacy etc – and was bragging about how he is “too stupid to fall for advertising tricks”, and also bragged about how “everything on my Facebook is private so no marketing company can ever get to me”. I put the obvious retorts aside, and told Jake that despite not being his Facebook friend – just give me a few minutes on his Facebook page and I’d be able to present to him a list of 50 items I could easily market to him.

He accepted the challenge, and about 15 minutes later I started listing off movies he’d like, events he’d like to go to, video games he hasn’t played yet but would like to etc. Just for fun I also recommended good steak restaurants because “I know you eat steak a few times a week.”

He was stunned. Figured it was some sort of setup etc. In reality? Despite spending 10 minutes marking everything as “private” on Facebook – he used the Facebook personalized URL for his profile page – facebook.com/username And the username he used was a unique one. A quick google of it and I had access to his blog, instagram, twitter, and about a zillion other things.

Of course – I can do all that for a person I don’t even know – yet I’m still struggling to figure out what to buy my wife for our wedding anniversary next week!

Have an awesome week people. Especially people from United Kingdom!

This article was written on July 15, 2013 however all articles are looked at on a monthly basis and updated to keep them relevant.