I am of course talking about the Jack Reacher book series, written by Lee Child. It can be silly, it can be over-the-top, it can be far-fetched….and I bloody love it. It’s airport fiction at it’s finest, and I just can’t get enough of the books. Without a doubt, my favourite book series ever.

However the last year was not good for Reacher fans. First the preposterous casting of Tom Cruise to play a 6″5 250lbs behemoth. And then the very disappointing A Wanted Man, which is probably the 2nd worst Reacher book of all time.

However his latest one, Never Go Back came out last week and I pre-ordered it on Kindle. Man, I love and hate that. I love that I don’t have to do anything – it just arrives on my Kindle and boom I’m ready to go – but I also HATE the fact that the books arrive at midnight. It’s soooo damn hard not to start reading then and there.

I was able to hold off and started reading it on Wednesday and had it finished by Thursday night. Just typical classic Reacher, and it was great to get the series back where it belongs.

If you’ve never read the Reacher series give it a try – perfect books if you like to shut your brain off.

I love vacations. I love planning them, dreaming about them, anticipating them and then of course actually going on vacation and enjoying the hell out of them.

But I also love how much more focused my work becomes once I’m actually going on vacation.

On a whim over the weekend, I decided to book a trip to Mexico for me, my wife and the kids. Friday evening it was nothing but a passing thought, and by Saturday it was a reality and all booked – we leave in the first week of October.

So it’s funny to see how my work changes. The next couple of months were vague for me – had a few things planned out, a few site redesigns and so on – but nothing really major. Yet Sunday morning I was up bright and early, notepad and cup of tea in hand, mapping out the next 3 and a half weeks to a bloody tee. Figuring out exactly what I want to get done, what I need to get done, and then also planning out what I’ll be pushing off till I get back etc.

Then there’s working out. I’ve been half-assing it with my workouts lately. But now people might actually see me with my top off? Shit, time do LIFT bro.

Really looking forward to this trip. It’ll be nice to take the kids along for once. That’s the worst part of trips I’ve been on – I miss the shit out of my kids. Will be great to have them with me and allow me to truly relax for once.

So nice having it back, isn’t it?

I don’t think my Patriots are going to have a good year. I made a shitload on the Bills +9.5 yesterday – what a steal that was. I think the highlight of Week 1 for me though was the Broncos. Man, Peyton and Welker were absolutely sick together and the Broncos offense looks amazing.

But just being able to sit down and watch football yesterday was tremendous. I met up with my brother in law and it was off to Wing Central for some beer, wings and football: 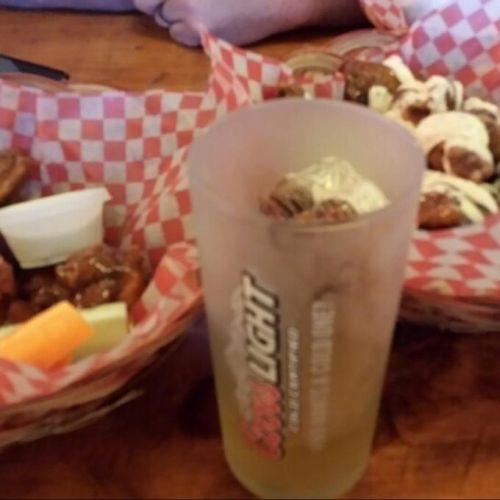 I should probably put “beer” in quotes because it was Coors Light. But hey it’s perfect for pacing myself – no point getting hammered when there’s so much football still on the agenda!

Now just bring back NHL and NBA and life is bloody complete.

Shit That Kept Me Sane in August:

Monthly segment where I talk about what multimedia has kept me entertained.

Television: Holy crap Prison Break where have you been all my life? Well, the first two seasons anyway. Everyone and their mother has informed me just how piss poor it apparently gets in the last two seasons but oh well. The second season is amazing and non-stop, and the first season is one of the most intricately written seasons of TV I’ve ever seen.

Didn’t watch any movies. Book wise ECW Press sent me a bunch of hockey books for a contest giveaway on BetNHL.ca so I’ve been reading those before I pass them on.

Video game wise I played and almost completed Borderlands 2 on co-op which is a load of fun, and I bought and beat Hitman Absolution which I loved. What I really liked about it was they got the right mix of stealth and action. I felt the previous games the action was crap – and shooting etc was a pain. This engine they have was perfect.

I’m sure you’ve seen it already. Why? Because it’s viral marketing at its finest and it’s bloody everywhere:

What’s great about it is the simplicty of it. LG clearly took a lesson from Heineken and their marketing team. I expect over the next two years we’ll see a TON of other marketing like this until it’s completely run into the ground.

Alright, I won’t get to my pre-Mexico list by just chatting away….I am off to work my socks off. Have a great week all – I’ll hopefully write more than T_IM this week! It IS on my list!

This article was written on September 9, 2013 however all articles are looked at on a monthly basis and updated to keep them relevant.