I’ll get to the title of this weeks T_IM at the end of this post.

Something else I would like to thank this week however is the WWE Network. Holy crap is it amazing – it just launched last week and I’m hooked on it. For those unaware, it’s essentially the Netflix of Wrestling. It launched with every WWE/ECW/WCW PPV and a whole bunch more content such as the last few years TV shows, and is adding more new crap every day.

This basically sums up my work for the last entire week: 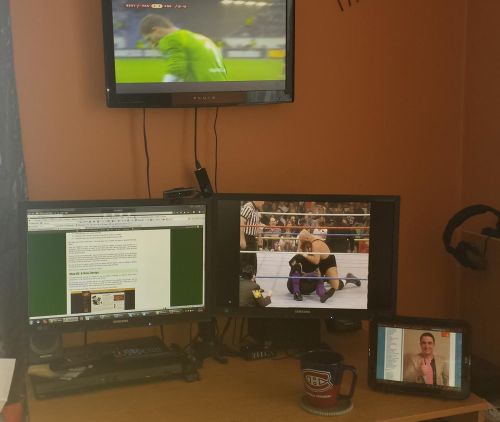 Working on one monitor, browsing on the tablet while using my 2nd monitor for old wrestling crap and then sports on the TV.

I meant to write about this last time out after my Olympic Hockey simulated on NHL 94 article – but I had written a lot of words already so decided to hold it off.

Going viral in 2014 is so so so so so SO much bloody easier than just a few years ago, and it gets easier by the day. I remember writing something with the intent of it going viral, then using my network of friends and accounts via Digg & Stumbleupon just to spend hours digging it and giving it a thumbs up, in the hope that it might be seen and catch on. It was usually an infuriating affair that never ended well.

These days however, we have Reddit. Reddit caught on like a house on fire compared to Digg and it’s no surprise; they have did a tremendous job at setting up sub-communities. Their formula is great too – as long as there is an audience, it’s easy to get people to see your submission and hopefully upvote it. If it’s a webpage you can even add the upvote option onto the page to make it much easier.

If you get to the top of your subreddit, there’s a chance you can make the front page but even better – the relevant people are going to see it, and share it with their audiences and so on.

On top of that you have Twitter, which is also tremendous for going viral. You just need to find one celebrity to retweet what you are sharing and you’re usually good.

Basically – going viral in 2014 is super super easy in terms of how you market it. All it takes is 1 link on Reddit, a few tweets to the right people. If the audience likes it – you’re golden, and these days sharing is so easy they’ll do all the work for you. From tweeting it to posting it on Facebook to sharing it on forums etc.

It’s just a case of having something worth sharing.

Monthly To Do Lists:

I might have written about this before – but one thing I have is a massive monthly to do list, that I tackle on the 1st of the month.

I find this is a great way to get the month off to a bright start – by being forced to be productive.

My monthly to do list currently has 42 items on it. Some of them are personal, some are minor work things and some are much bigger work things. Here’s a few examples:

Those are just a few examples. It’s something I do every month and it’s great. The whole thing probably takes me about an afternoon and it’s completely worth it. Really gets me going and if I’ve had a slow couple of days, this brings me back on track.

That’s another thing I should mention – backups. Are you all backed up?

Think of the nightmare scenario right now. Your computer explodes, and your web server explodes. Are you covered?

What about your cellphone? If that was stolen when you were out at the pub last night – how screwed are you?

It’s scary but so many people would be completely screwed if any of the above happens. So often I see people posting on Craigslist or Kijiji freaking out because their phone was stolen or went missing, and they’ve lost “a years worth of baby pictures” or similar. Seriously??? Back that crap up!

I’m a backup fiend. Probably too much actually – but whatever. I know if the worst happens, I’m covered. Here’s my backup situation:

Yeah I’m pretty mental – but better safe than sorry. Be sure to implement at least some sort of backup situation in case the worst scenario happens so you aren’t completely screwed.

If you did any web development or design in the 90s, then yeah you’ll love this article.

Whether it was London, Budapest or Barcelona – I still remember the opening day of every affiliate conference I’ve attended for the last few years. Waking up early with a hangover, battling with the lines and the hustle bustle of the crowd on the affiliate floor. Then being greeted by the most welcome sight ever: 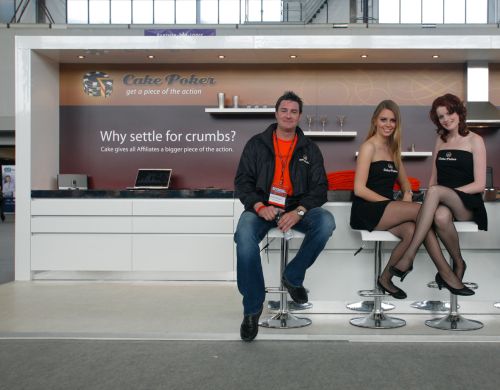 The Cake Poker kitchen, complete with a fridge full of beer and Chris Peddigrew always right there with a big welcoming grin on his face.

People throw phrases like “That guy is just the best” around lightly – but it really does cover Chris, and I was reminded of that while looking at the Memory of Chris Peddigrew page on Facebook. One thing you can take away from the pictures posted in there is the smile. In almost every picture, no matter the situation, Chris has just the biggest, most heartwarming and infectious smile.

I’d had a lot of interaction with Chris over e-mail, but I never met him until 2008 in Barcelona, when Cake had rented a big boat and my wife and myself were invited on board. I remember just how friendly and welcoming he was – especially to my wife, who was no doubt anticipating a boring night of affiliate talk. We chatted for hours about concerts and football making sure to razz on each other – with Chris getting the better of it due to his Dolphins having beaten my Patriots the previous week.

I still remember attending the London Affiliate Conference in 2009, and having Chris race up to me asking where I had been as he had been looking all over for me. The conference had only been open for about 30 minutes at this point! However he ushered me over to the Cake Poker stand, where they had toasters which would brand the Cake Poker logo in the toast! They had been going like hotcakes, but Chris had made sure to save me one and I still remember him just pissing himself laughing over the actual concept of branded Cake Poker toast.

It wasn’t just all fun & games either; Chris was great at business too, and he helped me so much over the last few years. Whenever my players had a withdrawal issue I’d e-mail Chris and he’d be on it. A player waiting a month for a withdrawal would get it processed within 6 hours after e-mailing me. I gained the players respect for that big time, but in reality it was always Chris who was the reason for that.

Whenever there is a death that affects you, it’s always best to think of the positives. Which I do. But when I next attend an affiliate conference, and I make my way through the crowds and I see the Cake Poker kitchen set up – even if it’s absolutely packed with employees, affiliates and beautiful women in tight clothing….

This article was written on March 3, 2014 however all articles are looked at on a monthly basis and updated to keep them relevant.