I didn’t even realize Spring was actually hitting us until Wednesday night. I was heading downtown to the pub and the cab driver said “What a great 1st day of Spring!” while choking on his laughter. That’s because we were in the middle of a blizzard at the time – the same blizzard that caused a 60 car freaking pile-up in Edmonton.

Really – weather is GOOD though because it’s a great conversation starter. People whine a lot about everyone else “always talking or commenting on the weather” but when you’re in the presence of someone for 5-10 minutes, be it in a cab, or waiting for your Starbucks or whatever – why the hell not start up a conversation? And talking about the weather is a great way to initiate a conversation.

I try to have fun with it. I usually use it to initiate a completely made-up set of circumstances and see how long I can BS for.

“Wow lovely weather outside!”
“Yeah I can’t wait to fly to Afghanistan tomorrow for the sunshine!”

Then you spend 5 minutes talking about all the missions you’ve been on, or how “I hate Afghanistan because the download speeds are like having a 56k modem” etc.

One of my favourite things to do is try and turn any small talk conversation into a conversation about Nicolas Cage – even if I have to make up stuff just to get there. Because Nicolas Cage is awesome and just the thought of him brightens up your day.

“Wow lovely weather outside!”
“Well as Nicolas Cage said – ‘A lot of people like snow…I find it to be an unnecessary freezing of water.”
“……….oh yeah, what movie was that again?”
“The Rock.”
“Yeah that’s right – great movie.”

So thank you Spring – you’ve given me an excuse to start up random conversations with random people about Nicolas Cage movies.

And I really can’t think of a better way to spend your day than doing that.

It’s ridiculously entertaining and not anywhere near as challenging as you may think.

Also Thank March Madness It’s Monday. Not only is it awesome because MORE FREAKING SPORTS but man as a sportsbook affiliate it’s quite the wild ride. Sportsbooks that show the players bets(such as 5Dimes) are the best because you don’t even have to bet yourself – you just see what your big money betters have placed wagers on and cheer the other side.

But I need to share this site with everyone: MightyDeals.com.

It’s basically one of those “time limited deals” sites – however all the deals are for webmasters. And they have a ridiculously huge selection and all for sick deals. 500 unique vector icons for $15, 500 Texture Graphics for $27, 69 generic customizable logos for $27 etc.

I’ve been spending an absolute ton there lately – I just can’t resist buying so much stuff.

I get $10 per referral in credit to spend more there, so I’m hoping I can at least hook some of you to fund my addiction. There really is some sick stuff there though so be sure to check it out.

I’m buying the new Galaxy S4 when it comes out – it’s my first fully touchscreen phone, and my first phone outside of a Blackberry so I’m quite excited for it.

So excited I subscribe to Google News updates about it, and I get an e-mail every day with all the top stories around the web. So it’s funny when you see incredibly similar articles like this: 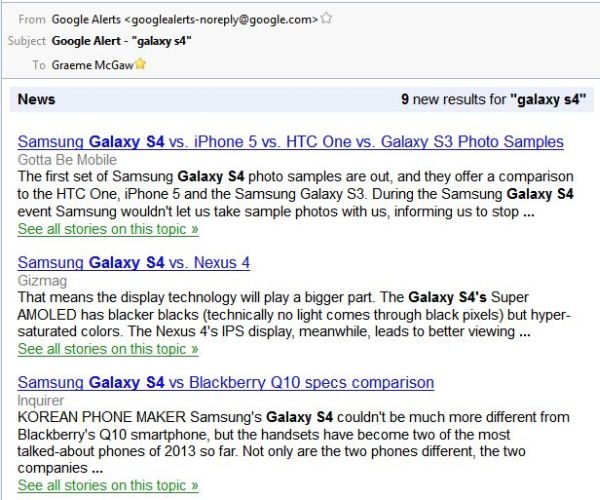 And I mean that e-mail went on and on and on with the S4 being compared to every bloody phone there was.

I’m surprised that craze never really hit the gambling affiliate world. A couple of sites have did it and I’ll link to this one at Pokersites.com. I mean look at it – it’s easy, EASY content which writes itself. Each section isn’t too long so it’s easy to read, and then you have the final CTA at the end which I’d expect may convert well.

If you’re starting a new online poker site maybe look at something like that as your niche – focusing on the versus market. Just for poker rooms but for EVERYTHING. Texas Holdem Online vs Omaha Online, comparing all the live support response times etc etc.

Really that’s how many affiliates become successful – they take tired out content but then put a new spin on it. And the spin doesn’t even have to be unique either. I mean a few years ago I wanted to build a huge new casino portal covering everything – you know, something that’s been done a million times before? But I wanted to put a different spin on it, and I noticed I relied a lot when Googling on Yahoo Answers, so I went with the Q&A theme for CasinoAnswers.com and it became a great success.

The whole “versus” articles can be great too for encouraging discussion, debate and so on. Poker probably wouldn’t get too much – but look at any iPhone vs Samsung Galaxy S4 article and the insane debate going on below in the comments.

Another example of putting a spin on tired contents could be done with betting tips. Take UFC for example – rather than your usual “UFC 162 Betting Tips” article you could go down fighter by fighter, like Anderson Silva vs Chris Weidman, and have categories for each one. Ground game, striking, experience etc all the time declaring a winner of each section.

Video Of The Week:

That’s a Carlsberg ad – they’ve been doing a lot of these “hidden camera” ads lately and this is probably my favourite one so far. It’s so good that I agreed with my coder when we meet up next month that we should drink a bunch of Carlsbergs in tribute to that ad.

This was another one that they did which I loved:

What I really like is that they actually make the videos so entertaining and worth sharing. I’ve seen soooo many of these “viral” ads that companies come up with that are utterly useless, so it’s great to see a company that doesn’t just “get” it, but gets it again and again and again.

So when you’re relaxing this Friday night and looking back at your week, do it with a 6 pack of Carlsberg.

This article was written on March 25, 2013 however all articles are looked at on a monthly basis and updated to keep them relevant.