Although for me this week, it’s more a case of TGIT. This is the last day before my kids AND wife head back to school, leaving me to myself during the day.

It’s going to be something, that’s for sure. Peace and quiet. I’ll be able to do work without having to referee a fight between them. I won’t have to stop in the middle of an article to help them beat a level on an XBox Game. No more interruptions to go to the park while I’m in the middle of building a website. No more having to put a conference call on hold, while I go make them a snack.

I give it two hours before I’m missing them like crazy!

But enough about that – it’s Monday, it’s another work week, and I am getting PUMPED.

One thing I always like to do is build a fun website – ie: DansCasinoBlog.com(now merged with CasinoAnswers) where I’d play at an online casino every week and blog about it. I never really cared about winning money – it was just fun to play at casinos and write about it.

One website I am planning to start up within the next few months is EggsBenedictQuest.com. In my opinion, Eggs Benedict is the greatest breakfast in the world, and nothing can compare. I mean just look at this wonderful description: 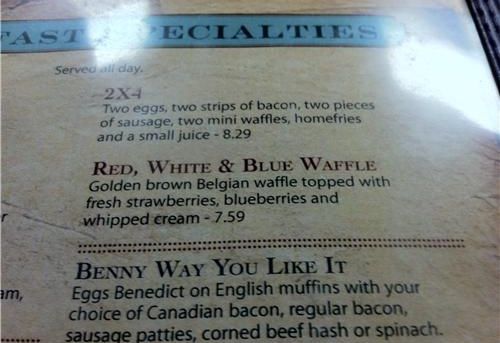 I’m salivating just looking at it.

Will the site make me money? Hell no. Well, maybe! I could sell local advertising, allow restaurants to bribe me to make them #1. Christ for all we know, “eggs benedict quest” is a SICK untapped market just waiting for me to roll in and make millions from!

But really – the point of the site is for fun. I run enough sites where I don’t care about the main topic at all, but still run them purely due to making money. It’s just nice to run a website purely for enjoyment purposes.

There’s a small percentile of people in the world that don’t need routine. They can float about life, adapt to any sort of work and sleep schedule, and be able to succeed in every department, 100% of the time.

But the majority can’t do that. The majority need a routine. All those 9-5ers who bitch and complain abotu their jobs don’t realize just how much they actually NEED that job. Not just financially, but to keep them in a regular routine. Take them out of that routine and they’re lost. That’s why there is such a thing as “that Sunday feeling” or “lazy Sundays” – because they have absolutely no plans whatsoever, and don’t know what to do with themselves if they’re not doing 9-5 every day!

It’s not just adults either; it’s kids too. All the way to adulthood, kids spend their days wishing they weren’t at school, counting the days until Summer holidays. A week or two in they’re bored shitless, with absolutely nothing to do!

That’s why this is a very special week for me – because I get to go back to a routine! I am literally FORCED to be in a routine where I will be able to work 9am-2pm every and that’s it – after that the kids will be home and I won’t be able to work. And I couldn’t be happier!

When you’re forced to work in such a small period of time, you’re usually more productive. When you’re in a set routine, you’re less likely to get distracted, and usually have the ability to function on autopilot.

If you find that you’re having troubles getting motivated to work, always look towards a routine. The human mind usually always functions better that way.

Quick backstory: there’s me(also known as Scotsman), and two friends who live in the UK, “Homer” and “Taff”. We’ve all been good friends for years.

Homer constantly posts really bad jokes on his Facebook page. I mean the worst jokes you could imagine. Here’s one example:

Tim Cook in charge of Apple? Wait for the headlines….

As you can see – absolutely godawful.

They got so bad, that Taff actually defriended Homer from Facebook and blocked him. He couldn’t handle it anymore.

Of course, I wouldn’t let him off that easy. Every time Homer posted a new joke, I would send it to Taff. I would find a different method of sending it every time. Over e-mail, text message, MSN, XBox Live, Forum PMs, Forum spoiler tags, Facebook messages – everything I could think of.

It got to the point where Taff was absolutely furious with me, and also blocked me from Facebook.

I apologized, and promised to Taff I wouldn’t do it again.

If you’re one of those poor losers stuck on an Android phone while us cool people rock our Blackberries, be sure to check out Best Android Apps for Webmasters 2011. An absolutely fantastic article, and if I ever lower myself to getting an Android phone or tablet, that’ll be my first stop.

That’s it from me. I’m off to spend the day with the kids, before booting them off to school in just over 25 hours!!!

This article was written on September 5, 2011 however all articles are looked at on a monthly basis and updated to keep them relevant.