This week we’re thanking The Worm that it’s Monday.

Now I know it’s Monday morning. Your eyes are still half-shut and you’re sipping on that coffee, hoping for some spark of life. So I’m going to try and explain the title of this one as simple as humanly possible.

“The Worm” does NOT refer to Dennis Rodman.

“The Early Bird Catches The Worm” is a famous phrase and motivational quote.

“The Worm” means what you want out of life.

I’m “The Bird”. I’m chasing the worm. And to do that, I need to get up early. Earlier than anyone else.

So thanks to “The Worm”, I’ve been waking up at 5am every morning for the past month and totally rocking it. If you know me, you know how important it is to wake up at 5am. I’m so much more motivated, and work so much harder.

That makes me the Early Bird.

So I’m thanking “The Worm” for making me the Early Bird. If it wasn’t for “The Worm” I’d still be sleeping in, wasting the day away.

Speaking of famous phrases – is the phrase “Clear as mud” popping into your head right now? Yeah, thought so.

When it comes to affiliate marketing I’m doing my Spring Cleaning NOW – that’s how far ahead I am of the game! That’s how early a bird I am! Okay – let’s not start that up again.

But yeah – I’m doing spring cleaning and planning for the near future etc – as evidenced by my 6 Gambling Websites I’m Building in 2013 article.

One of these things I am doing is going through my “Website Ideas” list or my “Domains I Own and am Doing Nothing With List” and cleaning those up. It’s amazing seeing some of the absolute TRASH I’ve picked up over the years. However there’s also some good ideas I dropped the ball on.

Here are a few highlights:

Tickets Domains: I’ve written about this story before but it bears repeating. A friend of mine was getting into affiliate marketing, and he had started a tickets site dedicated to cheap MLB tickets, and scraping ebay t populate the site. The website he had was utter crap but he’d picked up 3 sales in his first week.

We talked about possibly working together, and I came home ready to pick up a domain. Unfortunately I was HAMMERED, and when I started looking at domains I couldn’t stop. I woke up the next day to discover I had purchased over 600 domains. Multiple domains for every NFL team, NBA team, NHL team etc. I mean look at some of this trash: 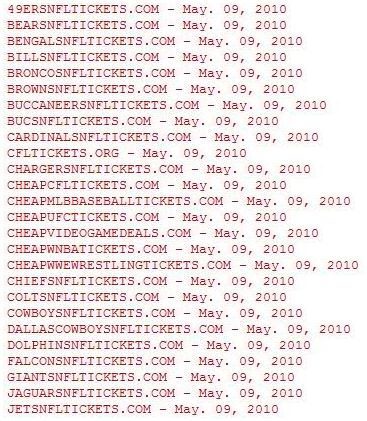 That’s a sample of the many, many domains I had. The worst thing about all that? I didn’t build ONE of those domains. Hell I think I still own a couple of them.

Ugh. Skeptical African Child would NOT be impressed: 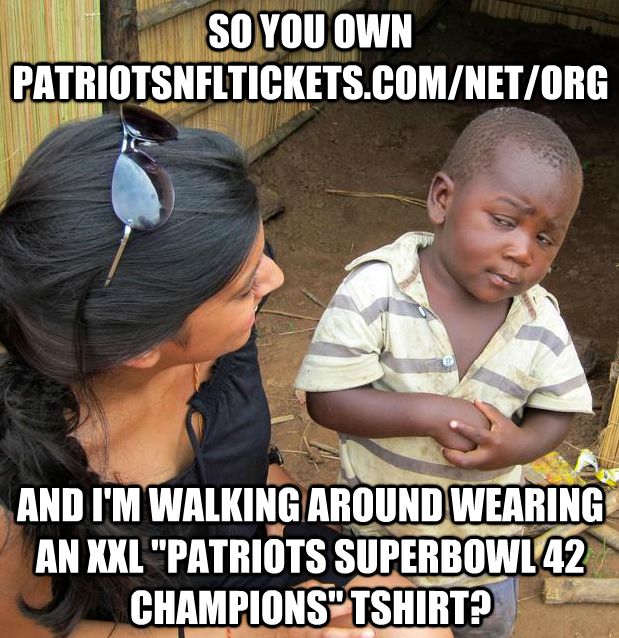 Other Trash Domains: BestFreeSlotsGames.com. Seriously? “Best” and “Free” in the same name? FreeCarbonPokerRakeback.com, FreePKRRakeback.com. I guess my theory was “Gee, SOME people probably think you have to pay for rakeback”. What an idiot I am.

BingoSmokingBan.com: I’m sad I never capitalized on that one actually. One of those domains I’ll always sit back and wonder. Bingo halls started banning smoking inside of them. My theory was providing an informational website on the smoking ban, then promoting online bingo instead because hey – you can smoke in your own house! The time has passed for that one. Probably for the best – it’s probably some pretty bad karma to profit while encouraging people to gamble AND smoke at the same time.

ChrisMoneyMakerBlog.com: Actually this one served a purpose – I was going to build it while following all the steps in my affiliate guide and use it as an example. But it’s amusing looking over the notes I made for this site when I planned it back in 2007. One article would be “What is Chris Moneymakers Myspace?”. These days, I’d be more likely to pick up traffic for “What was Myspace?’.

LOLPoker69.com: This is one of those sites that I’ve told about 100 people the idea of it – and they all roll their eyes. But screw them – I always thought it was gold. It’d basically be a poker humour site. Funny quotes fish say, funny screenshots etc. Where people roll their eyes with though is the domain name, and also my tagline. “LOLPoker69.com – because LOLPoker.com was taken”.

5Guys1Pick.com: Playing off the whole “2Girls1Cup” thing. And if you don’t know what that means…don’t Google it. The idea of this was a sports betting tips site. The “theme” of it would be 5 guys getting around every day for breakfast, debating the best sports tip of the day and then posting it – so 1 pick a day, with a blog each day detailing the arguments. I love this concept – if you steal it please let me know as I’d love to follow it.

People complain like Google, and how much information they know about you. And yeah I guess I can see that – but I can also appreciate it.

Google wants to know so much about you so they can actually deliver advertising you’re interested in. They’re actually trying to make advertising online relevant – how can you hate that?

I looked at a few and I thought about it – and decided to hold off on it.

An hour later I’m reading online newspapers – and look at what freaking ad I got displayed: 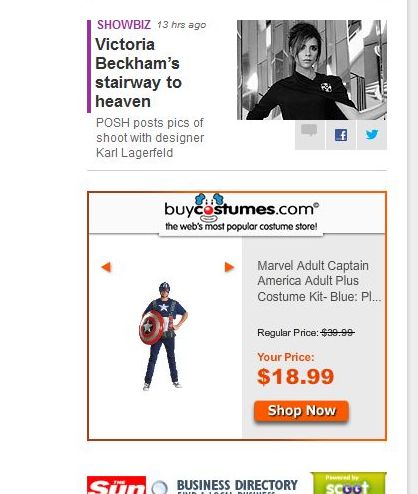 Seriously – HOW COOL IS THAT? Some people will be all “omg that snooping google you can’t hide anything from them” – who cares?! Instead of getting trash advertisements I’m actually getting 100% relevant advertising.

For the internet eco-system to survive, it NEEDS advertising like that.

My friend John is doing the affiliate awards again this year. Go Vote!

I wrote in my “6 gambling websites for 2013” article that I was going to be building more sports betting tips niche websites.

Now sometimes I launch websites for sports that I know nothing about. So I hire one of my friends who DOES know a lot about the sport. We split 50/50, he writes the tips and I do the marketing.

One website I did with a friend 2 years ago never worked out. We brought in a couple of players and went in the negative. He managed to pick a 30/1 tip and a 20/1 tip in successive weeks which one of the players followed. My friend got rather disillusioned by that and after 4 weeks just gave up on the site. I had too many other things on my plate as well, so the site has sat dormant.

Anyway – fast forward about 2 years and that tracking link with the negative amount? It’s FINALLY hit the positive. So 2 years after that website was started and then dropped, I get to show up at my friends and say “Here’s $100 from that website we worked hard on years ago.”

Nice feeling to be able to do that. Especially because he quickly became disillusioned by affiliate marketing and this will help him see it in a new light.

Let’s end this weeks article with a quick trip in the time machine.

We’ll head back to 2007, where a news station is talking about this hot new thing called….Twitter?

So much of that video is gold.

“Atwitter Over Twitter”
“Forget Blogging! Forget MySpace!”
“Is it possible that making a cellphone call could become a thing of the past?”
“You’re about to learn what aTwitter is”
“Master blogger can’t keep his fingertips off”
“The latest cyberdrug of choice is called Twitter”
“[Twitter is] an addictive concoction of blogs, google maps, personal websites and text messaging – all bottled into one network.”

Have a fantastic week everyone, and try not to get distracted by whatever todays “cyberdrug” is.

This article was written on October 29, 2012 however all articles are looked at on a monthly basis and updated to keep them relevant.