Whew – you might have been living under a rock if you haven’t heard of The Fappening.

To sum it up for those who are unaware – basically a bunch of celebrities legitimate nude pictures were released on the internet yesterday via 4chan, with many more to come. The biggest name of all is probably Jennifer Lawrence.

It’s not quite clear exactly how it all came out – it looks like clouds were hacked and all this other crap. But it has been quite the entertaining last 24 hours on the internet.

Some random thoughts during The Fappening:

Still, there are quite a few things I have been enjoying like:

The Twitter Denials: Celebrities going on Twitter to deny it’s them in the nude pictures, despite in some cases strong proof to the contrary. Like I said above – so there’s a nude picture of you, what’s the big deal? If your agent or publicist is telling you to go and deny it even if it’s true – yeah, you need to fire them immediately.

Media: It’s 2014 guys, how the hell is this still happening? 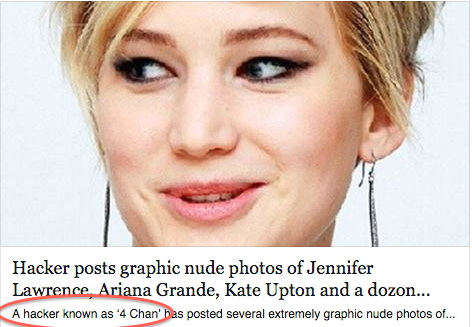 Either way – the whole thing is amusing as hell, and I’m looking forward to finding out how exactly this happened. My prediction is it will be a security flaw in the iCloud, followed by lots of people swearing off Apple, and then the iPhone 6 having record sales.

So the Ice Bucket Challenge is still going strong and that’s great – but one thing that has really disappointed me is the lack of any good viral videos on the challenge from an actual company.

Are all their marketing departments asleep at the wheel or something?

I’ve seen a few vague attempts but nothing spectacular and that’s disappointing because this is the perfect time to do it.

How about Pepsi? Have their staff do it and say they don’t want to waste water? So they pour coke all over them instead.

Or McDonalds, who had all those problems with their employee handbook last year? Allow some random employees to pour it all over their CEOs. And Ronald himself, of course.

Or do a funny take on it? Have Taco Bell do the “coupon bucket challenge” where they throw a bucket of coupons over you and you grab one that you can use for your meal.

Either way – it’s quite a fun thing to think about. Start thinking about companies and how they COULD utilize a viral opportunity like this.

To promote their new Dark Roast, Tim Hortons did the following:

Love it. Think of how little that cost them compared to a regular marketing campaign. Will never get tired of seeing campaigns like that.

I want to mention a book that I’m reading that is quite great. It’s Console Wars: Sega, Nintendo and the Battle That Defined a Generation.

I’m only about 30% through it but I’m thoroughly enjoying it thus far. And it’s good to look at those times and see everything that went on – there’s so much more to marketing for example, and it’s great to read about Nintendo and their practises over the likes of distribution, or the battle at Sega in regard to how Sonic should look.

Very entertaining book and one we can all learn from as well.

This article was written on September 1, 2014 however all articles are looked at on a monthly basis and updated to keep them relevant.