It’s been a great year – but I knew it would be. I work from home and live in a first world country. How could I ever complain when I have that going for me? Too many people take their lives for granted.

Was there negatives over the year? Huge fails? Did I make mistakes? Sure. But I prefer to think of them as learning experiences. Corny, but true. We all make mistakes, we all fall down – but it’s how you get up that matters.

Was there positives? Tons of them. I’m not going to do a year in review or anything like that – but a few highlights in my work life were:

Seriously, just a fantastic year – and yet all it does is drive me on to make 2013 even better. Although I’m pretty sure NOTHING will top My Wrestlemania Weekend – easily the biggest highlight of 2012 for me.

Hell, this last week has been amazing too – and not just for the work stuff. Just a few highlights: 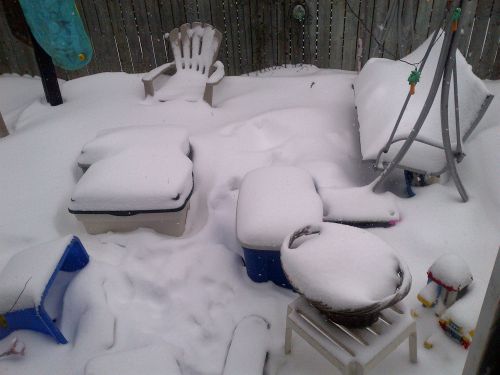 That’s my backyard – and the sudden snowfall caught us off guard, as I still had a lot of crap out there to put away. Oops.

It was fantastic though – we haven’t had any snow all Winter, then woke up Christmas Day to the place just covered in snow. We ended up getting about 3-4ft of snow when all was said and done. Love it.

I’m also not a fan of the family functions – so it made for the perfect excuse to leave the big family Christmas dinner early. “It’s snowing like crazy out there – got to get home before the roads get any worse!”.

On Boxing Day, our cat had kittens: 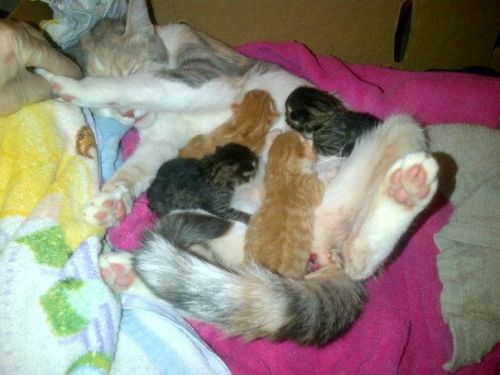 Honestly – it was gross as all hell. Blood, placentas, umbilical cords and other gross things like that. My wife had a field day with it – it’s been her childhood dream. She said it was the best Christmas present she could hope for – which sucks as I bought her a $120 electric blanket!

The kittens really aren’t my cup of tea though, so I decided to head out and do some Boxing Day shopping….

Oh hell yes. I also ordered Madden 2013 online. So while the kids and wife are busy holding the tiny little meowing creatures, I’ll be too busy slaying dragons in Skyrim and assassinating people in Dishonored. That’s fine with me.

The uDraw game is a present for my kids – my son particularly. He’s been drawing a lot lately, so I’m hoping to encourage him to get into graphic design. I bought him the uDraw for XBox just for fun, as well as an actual professional drawing tablet for the PC.

It might sound like I’m looking out for his welfare – in reality I see it as a long-term investment. If he becomes a professional graphic designer? Free logos for life baby!

Of course, those games were courtesy of….

I won the Poker Affiliate Listings league netting a cool $1k in the process!

It was a close one. The two men that got me there, AP and Doug Martin, failed big time last week. Thankfully CJ and the Chargers Defense got me the easy win.

Yep, just a fantastic week and a great way to end 2012. Although my “end of 2012 to do list” is being ignored thanks to my addiction to Dishonored. Man, what a game that is.

Never been a fan of resolutions, to be honest. Feels like you are just setting yourself up for failure. And not just a regular failure – most people like to make lifetime resolutions like “Quit Smoking” or “Hit the gym every day”. Then they go off the rails once and it just feels like such a pile of failure that it puts them off trying again.

If there’s one thing I REALLY want to do in 2013 though, it’s right a ton more for Affiliate Bible. Ideally I’ll write 1 T_IM every week, as well as 2 actual articles.

Set the over/under on that one for the 2nd week of January.

Article of the Week:

25 Moments That Restored Our Faith in Humanity This Year over @ Buzzfeed. Some really awesome stuff there. People can be real great.

Bonus additional article – 20 Biggest Brand Fails of 2012. Funny to see these days how many companies F up on Twitter – although the AMC/Oreos interaction really wasn’t a failure. Great PR move if anything.

A short story from my personal life, that I think sums me up very well.

My 5 year old daughter woke us up this morning at 3am, screaming the PLACE down. Out of nowhere, she had really bad ear pain.

So I got her, brought her into bed, and we gave her medicine. She spent the next 30 minutes screaming the place down every couple of minutes. However finally at 3:45am she passed out and went back to sleep.

I carried her back into her own bed, then went back into the bedroom. My wife was still awake, and I had a glint in my eye. She took one look at me, and groaned as she said:

“Oh no – don’t say anything. I know what you’re thinking. It’s the middle of the night. The kids are asleep, and we’re awake. I know exactly what you want – I can tell with the excited look on your face.”

“You want to go down and work don’t you?”

This article was written on December 31, 2012 however all articles are looked at on a monthly basis and updated to keep them relevant.