Welcome back to another TGIM – Thank God It’s Monday.

This is going to have to be a rather quick TGIM because I’m not going to get the chance to do any work today! I guess I’ll celebrating TGIT instead. My wife is away, so in about 30 minutes I’m going to have two kids charging down the stairs and pulling me away from the computer so we can go out for breakfast. McDonalds here we come!

Although today is a wash, I’ve got a lot of great work planned for the next week that I can’t wait to get started in. I built a couple of new websites and now just have to write some content for them. In addition to that I am going to AB the AB – that’s Article Bomb the Affiliate Bible. I’ve got an absolute TON of articles to get up here, and I’ll be firing away all week. If there’s any particular topics you’d like me to write about, post in the comments below.

What a great time to be alive, eh? On one side of the pond, the football season has already kicked off and is in full swing. Must admit I am really enjoying watching Man City this season – a lot of attacking football, and a lot better quality than last season. Aguero is amazing. On the other side of the pond the regular season in football is still to start, but it’s probably my favourite time of the year: Fantasy Football Time!!!

This year I’m entering in leagues with my brother-in-law as “co-manager”. I find this is a lot more fun because we meet up and drink ridiculous amounts of beer, all under the guise of “a fantasy football meeting” for our team, the Blue Waffle Bombers. Fantasy sports are just the best thing ever. If you’re an affiliate BTW, you absolutely have to try and promote FanDuel – I find it’s hard to get people to sign up and participate – but once they do, they are HOOKED. Pity they don’t do soccer, but I know I’ll be all over that come NFL & NHL season.

I’m hearing rumblings upstairs, so let’s get to the topic of this weeks TGIM…

For those who don’t know what “banner blindness” is – basically since the web was born, there’s been banner ads on every website. It’s got to the point where the majority of web users don’t even notice banners on webpages.

Unfortunately there’s no magic cure for banner blindness – but there are a couple of things you can do that I’d like to recommend.

(1) In Your Face Banners

The majority of people seem to put banners in the most generic places – in their sidebar, or in their header next to their logo. Places where the average user already tunes out.

I’ve been doing some split-testing over the last week with some in your face banners that people can’t afford to miss. We’re working on the new design of CasinoAnswers.com so I’m testing a bunch of stuff out to see what works, and what should be integrated into the new design. One split testing method I utilized was banners at the top of the site like this: 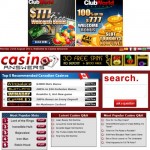 It’s not the prettiest thing in the world, but it works. I’ve seen a dramatic increase in clicks, signups & RMPs on those banners compared to all the other banners I have integrated on the site, like the one beside the header for example. It’s in your face, it’s the first thing people see, and it’s one of those things that people just can’t HELP but see.

Consider more banners like that. I also find banners within the content work well – the big square banners generally work out well for that.

The click-thru rates on multiple banners side by side compared to a single banner ad is more than double. I think it’s a combination of quite a few factors, like the more banners, the more eye-catching. It also offers a “choice” – which people always feel more comfortable looking at. Ever notice how many websites out there use the 4 125×125 banners in a square like format? It’s because it works.

I’m also finding that using multiple banners promoting the same property seems to work better too, FYI. I think it’s better for the user to see just ONE property promoted on a page, over and over again. It makes the user think “Wow, they keep promoting this casino, it MUST be worth checking out”. I know one sports website that ONLY promoted Bodog, and made some mad bank and a crazy amount of real money players. As soon as they integrated other sportsbooks, the signups dramatically decreased.

Really – you have to SELL these things to your visitor. Ever bought a car? Does the car salesman present to you 5 different cars one after the other? No, he’ll usually focus on just one vehicle, as soon as has assessed you and figured out what your interests are. Then he’ll bust his balls continually trying to sell you on that product. And let’s be honest – car salesman are usually among the best salesmen in the world. That’s one thing I am starting to increase on my websites – whenever someone is on a page, they’ll only see promotion for one online property.

If you want people to see banners, you should encourage the user to LOOK at where the banners are. One thing you can do is to have something there for the user to interact with. Have a poll for example, just above your banner. When the user interacts with it, their attention is diverted over to that section of the website, and they’re more likely to at least see the banner.

Well the kids are now downstairs, and are convinced that we have to go right away, in case we miss the McDonalds breakfast. We only have 4 whole hours before McDonalds breakfast ends, but try explaining that to a 4 year old with a hankering for pancakes. Damn McDonalds, and their time limited marketing!

Before I go – I just wanted to mention the AWESOME site WelcomeHomeBlog.com. Basically when a lot of the military guys come home, they like to surprise their wife/kids/parents etc and not TELL them they’re coming home. Then they burst out of a box at the kids birthday party, or show up unannounced at the kids school and yeah – all kinds of awesome.

WelcomeHomeBlog has compiled pretty much EVERY one of the videos that are posted on Youtube onto their site. It’s a phenomenal website and major props to them for it. I just can’t get enough of seeing the pure joy and happiness at seeing these reunions.

Of course it’s not JUST family they surprise – it’s their pets too. As a dog lover, I’ve probably watched this one 3 or 4 times:

Just fantastic, and that dog is all kinds of awesome.

Have a great week guys. TGIM.

This article was written on August 22, 2011 however all articles are looked at on a monthly basis and updated to keep them relevant.