You can fill in the “F” with whatever you want. Fall, Football – it all counts. I’m just happy it’s Monday and I get to write the first one of these articles in awhile!

Life has been rather crazy lately, and I haven’t been able to do much work. As an example, here was the way I spent the last couple of weeks in August:

Overall a crazy time, and I am just getting back into the swing of things – starting of course, with this article!

This update is mostly going to feature awesome little things I’ve seen on websites lately that have really stood out to me.

Met a couple of my good affiliate friends when I went to the Blue Jays game in Toronto. First up is Graham of the awesome CheapDude.com and also John Wright of my fierce competitor, Gaffg. Always good times with those guys, and I had a blast.

I talk a lot on here about how great it is being an affiliate, as opposed to being in the 9-5 job. Just meeting up with those two again provided me with another reason. I left my 9-5 Government job around 6 years ago. I worked there about 8 years. You know how many people I keep in touch with from that place? 1. And even then we maybe send each other an e-mail 2-3 times per year.

Yet in the affiliate industry I’ve made countless friends. People like Graham and John – where we’ll keep in touch mostly via Facebook/Twitter and sometimes e-mail, going months without seeing each other – but if our paths ever cross in the same city, there’s no question we will be meeting up and partying our asses off.

I mean – before I left, I was talking to one affiliate manager who I am friends with and lives in the UK. My trip to the UK was hush-hush but I informed him about it. He said if I wanted to spend an extra night and go visit London he’d put me up and his program would also cover the flight price. That’s what I really like: you get to make friends with both affiliates, and affiliate managers.

I’m in many Yahoo Fantasy Football Leagues. Each year, I get more and more impressed with the way Yahoo manage to do everything.

They introduced a new feature(I believe it is anyway) this year which is recaps after each week. Here’s the recap for one of my Week 1 games – click for big: 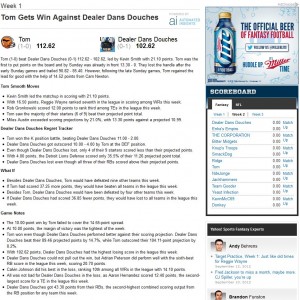 I mean really – all it is, is stats. That’s it. Stats but presented in an incredibly readable fashion – you almost believe that it was written individually just for you.

This is something that keeps them ahead of the game(even though there’s a lot of competition out there). On top of that, it encourages you to do more pageviews at Yahoo, which obviously increases the chances of you clicking ads or at least bumping up their stats.

Recently I went to unsubscribe from one, and up popped this: 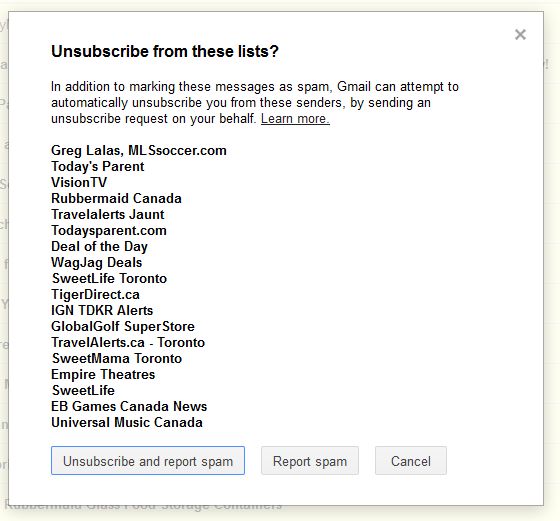 Which is fantastic – an easy way to unsubscribe from a ton of newsletters – especially if you were hit by spam or whatever. It never fails to impress me all the little tweaks Google implement that you don’t even realize yet make a better user experience.

And recently while placing a bet at William Hill:

Which is awesome – they allow you to give reasons as to why you bet on something, and also read the reasons from others. This is just yet another small thing which can only increase business. From a betting perspective – people LOVE to yammer on about their tips etc – now they can do it with a huge audience there. From the readers perspective – it’s a great way to entice the reader, and turn the potential better into actually betting. He’s not just reading the generic tips anymore – he’s reading real tips from real people.

It may not seem like a big deal – but it’s the small things like that, which can drastically increase a websites income. Always thinking of the user, how to make money from the user, and how to actually squeeze even more money out of the users actions.

And just to clarify – when you bet, it doesn’t prompt you every time. It just gives you a “Tip It” button. See the example below: 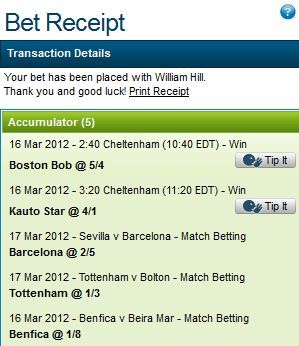 A couple of months ago when the new Batman movie came out, one of my friends wanted to go see it with me.

I am ashamed to admit I had never seen Batman Begins OR The Dark Knight. I meant to really – I just never got around to it.

So while doing some light work, I started watching the Batman movies. And while filling in a web form while watching Batman Forever, this captcha popped up: 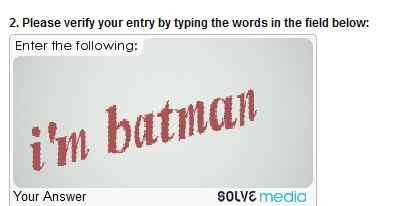 Seriously, what are the odds of THAT captcha popping up while watching freaking Batman? To say I was freaked out would be a slight understatement.

And just for the record – Batman Begins sucked big time. The Dark Knight was awesome and pretty much the perfect movie, and The Dark Knight Rises was decent but waaaay too long.

A couple of weeks ago while searching, I came across these results: 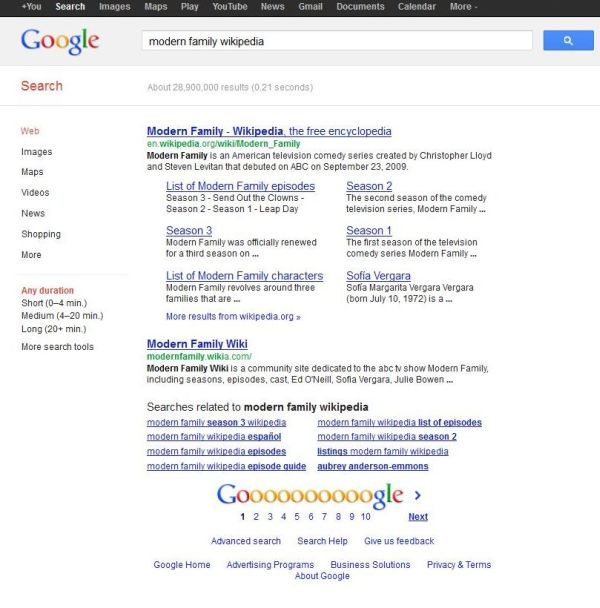 Obviously adding the “branding” of “Wikipedia” caused those results, but it’s very interesting to see that sort of layout. I haven’t been able to duplicate those results, but if anything I think it is a strong indication of Google leaning even more towards protecting companies brand names.

For those unaware – Affiliate Bible now has a Facebook Page. You should Like the Facebook Page because magic ponies jump out and shower you in money. I think that’s how it works.

So of course I’m posting the articles I write here onto the Facebook page. Recently when going to post it I saw a “Promote” button.

I clicked it and: 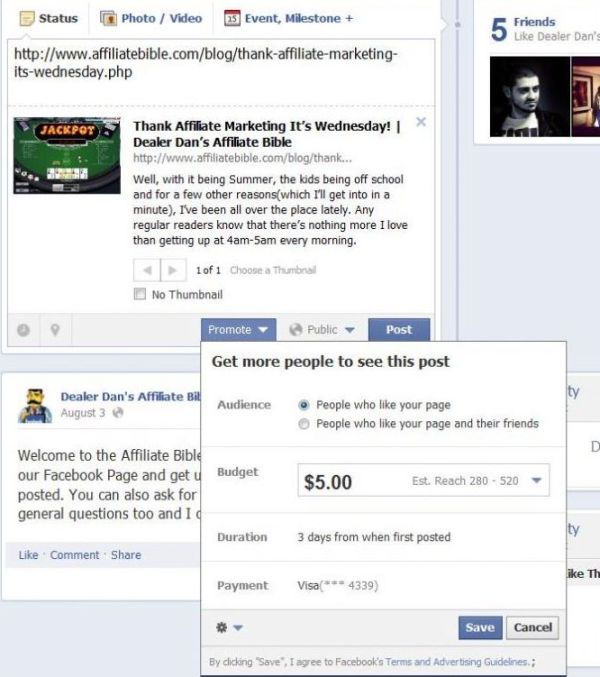 That is freaking awesome. I mean obviously Facebook would implement that – but just look how SIMPLE it is.

Here’s what that is accomplishing:

Take a look at your websites. Look at how you interact with the user, and think of ways where you can both make money from the user, AND do something to benefit them in some manner. That way you’re killing two birds with one stone.

I’m now off to enjoy my first REAL week back at work. Have a fantastic week everyone.

This article was written on September 17, 2012 however all articles are looked at on a monthly basis and updated to keep them relevant.