And let me just take a moment to give Tom Brady the biggest thank you I can possibly give for finally ridding us of all the Tebow talk. I also have to give an additional thank you to Eli Manning even though I hate him – because Giants eliminating the Packers is also quite the newsworthy item, which should hopefully take up most of the talk on Sportscentre this week, ridding us of Tebow until next season.

I actually made the mistake on Friday of watching Sportscentre. I’ve boycotted all the sports shows all week long due to the Tebow talk, but I flicked it on after the Bulls vs Celtics game just in time for their top 10 plays of the week. There were some great plays – my favourite being the #10 where a bowler didn’t let go off the ball, and ended up falling on their arse. However any joy I had was quickly taken away when the #1 play was of course Tebow vs the Steelers.

What I really liked about Saturdays game was that it wasn’t even a close game at all. Patriots absolutely humiliated the Broncos. “Men against Boys” would be a huge, huge understatement.

Who knows – maybe this will be a permanent name change. I’ve always felt a bit weird thanking God for Monday considering I’m not religious in any way. And I know next Monday I’ll be thanking Tom Brady for sure, for sending is to the Superbowl where we can hopefully get revenge on the Giants.

What a great week last week was. I hope you’re all having as productive a start to January as I am. With the wife and kids all back at school, it is great being able to sit down and actually do work.

I’ve been focusing pretty heavily on getting up at 5am this past week. What I like to do is get up at 5am, and take my dog out for a walk. It’s still pitch black, no-one in sight – no cars or anything.

Every time I do that, I feel like I’m getting “ahead” of the world. You know how we all wish we had time machines or the ability to stop time? Well waking up at 5am is the next best thing. You look around and realize that everyone else is still in bed – and you have an extra few hours to start working, and get ahead of them all.

If you’re struggling with motivation, try it some time. Get to bed early, get up super early and go out for a walk and just look at the world. They’re all wasting their time in bed, while you’re out, about and ready to rock.

This is something that bears repeating over and over again – everyone loves a deal. People always like to feel like they’re getting the “best” out of something. That’s a large reason why the likes of Black Friday and Boxing Day sales are so popular – because people are getting “deals”. They don’t mind being bent over and screwed for the rest of the year by the likes of Walmart etc – because they know on a few special days of the year, they’ll be able to get their “own back”.

That extreme couponing show is just one example of the lengths people will go to to try and get a deal – to try and “beat the system”.

So I listed it again. For $40. Within an hour of putting it up, I received two e-mails from people bidding $35. One of the people that bid $35? Was a person that e-mailed me originally offering $25.

It’s the way most people are. They don’t care how much they spend or if they even need something – they just want a DEAL. This person went home all happy that they “talked me down” to $35, when in reality they could’ve spent $5 less and got the game if they just met my asking price.

Start thinking about that, when you write your content. I look at all those reviews of poker rooms and casinos out there, and I never feel like people are offering a good “deal”. Some sites will market an “exclusive bonus if you click this link” but they never sell it on the player. They never really tell them WHY its a great deal.

That’s why my Casino Answers Black Card Program works out so well when it comes to conversions. People believe(and they are correct) that they’re getting a better deal than everyone else. Throw some time limited offers on there and it’s like printing money.

It’s also why rakeback took off initially. Because people again, were getting “deals” and they felt the power was in the players hands. I’ve never been a fan of in-house rakeback simply due to that – I’ve always felt that having to go through an affiliate and deal with the affiliate has a player feeling like they’re “getting one over” on the poker room, which is why rakeback was always such a big hit. I’m sure if iPoker allowed affiliates to offer legal rakeback plans for one week, they’d see their traffic #s go up by the thousands overnight. There are just too many players these days however who won’t play without rakeback, even if the in-house VIP/rewards program is better than a standard rakeback deal.

Welcome to 2012, where everyone and their mother wants to make money online. And if you browse the web at all, you’ll no doubt see tons of ads about how you can “make money online by blogging”.

The problem is – most people don’t understand how to make money online by blogging. They get a WordPress or Livejournal account(or hey, maybe even their own domain!) write a few random blog posts talking about their cat and their opinions on a TV show, then sit back wondering why they aren’t making millions.

Graham Rowlands gets it. He started the blog CheapDude.com. The theme of the site is simple and his tagline sums it up – “From cheap eats to saving money, living thrifty in Toronto”. It’s a great gimmick, that immediately makes his blog stand out from the crowd.

Yet if you look closely at his blog content, you’ll see that a lot of the content is what you’d find on many other blogs. Restaurant reviews, talking about vacations he’s gone on etc.

It’s that “gimmick” to the site that really makes it stand out from all the other blogs out there. And as I said previously – people love a deal. He’s going to be able to build up a big audience with this site just from people wanting deals – and any time he sees a deal and posts about it, he’s sure to get some affiliate sales. On top of that, restaurants will notice his blog and invite him in for free meals etc.

If you’re looking to write a blog to make money online – go take a look at CheapDude.com first, and see how great a job Graham does.

Remember when I mentioned the #10 video on sportscenter, of the bowler falling on his arse?

Whew, that’s about it for me. I am pumped to work, all thanks to Mr. Tom Brady.

Thank Brady It’s Monday, now I can watch Sportscentre again! Although tonight I’ll be busy watching the premiere of the new Alcatraz TV Show. I’m very pumped for it. 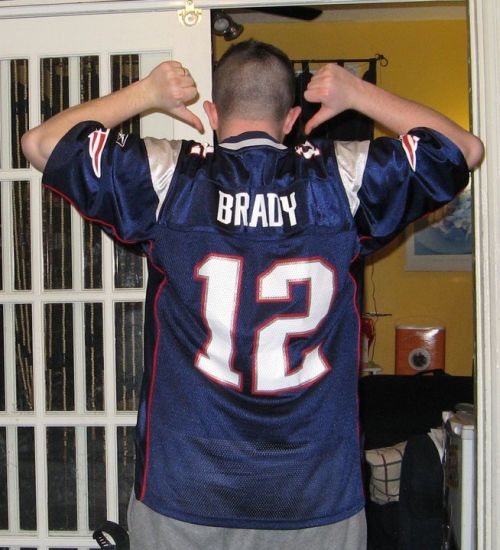 This article was written on January 16, 2012 however all articles are looked at on a monthly basis and updated to keep them relevant.