Well it’s Family Day – at least here in Canada. I don’t think you have it in most places – it’s basically a day where people get it off from work, the schools are closed, and you are meant to hang out with your family – so I figured it was appropriate to thank family today.

A lot of people hate days like this and Valentines Day – I particularly enjoy Valentines Day due to all the “rage against the machine” rants on Facebook, and how it’s all a “trick made up to screw people out of money” etc.

Really, Family Day and Valentines Day are GREAT days. There are many people who don’t do SHIT with their family, and there are many spouses who don’t do ANYTHING with their significant other either. Having one day per year to remind them “Hey, do something together!’ is a great thing.

It’s sad that people sometimes need those reminders – but hey, that’s the way people are.

Now let’s get some quick work rocking in before I have to go spend my day with two bratty kids!

Well obviously I had the Mexico trip to keep me sane, but I also had quite a few other things to keep me going in January. Let’s see what Multimedia kept me entertained last month:

TV Shows: Really didn’t watch much TV in January. I continued to go through Cheers and am about halfway through Season 3 on that. With the NHL back I was mostly just watching sports all the time.

Movies: Didn’t watch any movies either. Honestly I’m getting really bored of movies. I hate seeing them try and cram everything into a 2 hour movie. I’d rather get invested in TV shows these days – I think my movie watching days are done, except for books that I read which are then turned into movies.

Video Games: All my time was on Far Cry 3 which I beat in January. The game is a little bit too easy and simplistic – but overall just a fantastic game. Highly recommended.

Books: I went back and read a few books in Andy McNabs Nick Stone Series of books. Probably continue to re-read them for the month of February, although I might also try my first Stephen King novel.

One great aspect of helping out affiliates is that I get to watch their sites either prosper or die. Sadly, the latter happens quite a lot but it’s really good to see an affiliate whose site just grows and gets better as time goes on.

One such affiliate is Deneil, and I wanted to throw him some link love here for his new site Minimum Deposit Gambling.

It’s been great to watch the site grow – the “mentoring” aspect of it all was actually really easy. Deneil already had prior experience as an affiliate and I was more there just to bounce ideas off and make sure he was still on the right track.

It’s been fun to watch a site like this and how it grows. Even better is he’s doing it the complete opposite of how I wouild build a site. I always recommend and go with Think Big, Start Small. He instead went with “Think Big, Start Big” so it’s really neat to watch it grow from that mentality and perspective.

The kids school does a pretty neat thing – for the 100th day of school in Kindergarten they have a big celebration, and people have to bring in 100 items or do something related to 100. For example bring in 100 marshmallows or 100 chocolate chips, or 100 jelly beans. I mean there’s ideas outside of food too but it’s kids – their minds evolve around candy.

I decided to do something different with my daughter. We were brainstorming and came up with the idea of “100 people I know”. It’s quite bizarre to think that a 5 year old would know 100 people but she did: 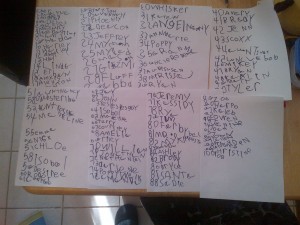 Of course there’s a few cheaters in there – “Santa” is listed at 81, and WWE wrestler Daniel Bryan is #63 as “Yes Yes Yes Guy”. But hilariously after we were done we came up with about 10 family members who we had forgotten to add. Oops. This is one picture that won’t be able to go on facebook.

Also #61 makes my day. And #62 is actually John from Gaffg.com and F1 Betting. Good to know at least one affiliate made the list.

Well I better wrap things up here and get to spending time with the family. Maybe I’ll throw the idea of “building a family website about Blackjack together” out there and see if they bite.

Have a great week people. I’m all caught up from my vacation and ready to ROCK.

This article was written on February 18, 2013 however all articles are looked at on a monthly basis and updated to keep them relevant.