Actually you know what – I’m NOT going to thank Easter Eggs today. I’m going to go as far as to say: SCREW EASTER EGGS.

As an adult, obviously your feeling on events and holidays change. But for the most part they’re still awesome. Christmas as a kid and Christmas as an adult? Not that different. Santa still visits me, I still get gifts – and I get the joy of watching my kids open all their gifts, as well as the joy of shopping for them.

But easter is a whole other ball game.

I remember the joy as a kid, waking up and seeing the Easter Bunny had visited. Huge chocolate eggs and absolutely delicious. So much chocolate. And that’s all you would eat all day long – chocolate! Best thing ever.

As an adult? Man with calories and sugar and fats and sodium and cholestorol – I can’t even eat a bloody creme egg without feeling guilty! Going shopping to buy easter eggs was tough – so much awesome easter candy and chocolate out there. Malteser eggs, button eggs, 3 ounces of cadbury dairy milk presented in bunny format. It’s brutal!

Even worse? It’s 2013, yet my dreams as a child STILL aren’t fulfilled. As a kid I always dreamed of basically a larger version of a creme egg – a humongous easter egg with all that creme inside. Or one big ass giant malteser. And they’ve STILL not came up with anything like that yet.

Even though the majority of them suck, it’s still fun to see what websites come up with for April Fools. And there’s usually a few out there that still get people. I also like when companies like Boston Pizza announce a brand new item which IS real on April Fools Day(the announced the Pizzaburger) and no-one can figure out whether it’s real or not. (BTW my friend Graham is running a Boston Pizza Giveaway if you want to try the Pizzaburger for free).

I have to give props to Youtube – they went with the April Fools joke that they were shutting down, and that the past 8 years has all been one big contest to declare a winner.

When I heard about it I groaned – thinking it was going to be horrendous. But the actual video they produced was amazing:

This is clearly just a parody of the whole April Fools phenonemen and it’s fantastic – I like that they went and got people from old videos too – top job Youtube. What’s even better is apparently they did some sort of live stream announcing the nominations, and it went on for literally hours. I checked in at the 4 hour mark and they were still going. Now THAT”S dedication.

I’m doing a walk for charity – it’s the So Kids Can Talk campaign. Basically one of those help phone lines for kids in trouble so they can call someone anonymously and talk.

This is the first time I’ve supported this charity, and I think it’s a pretty awesome charity. It must be so hard for a kid to not have anyone to talk to – especially in this day and age where bullying seems more prevalent than ever – and it’s great that they can call someone anonymously to talk about it.

I can’t imagine how tough it must be for the operators. To have kids on the line all day, breaking down and talking about how hard their lives are, or how they want to kill themselves etc. Unreal.

If you want to donate, that’d be awesome and appreciated. Here is my personal donation link.

As a bonus – I’m doing the walk in Edmonton, following a trip to Las Vegas. In short – it means I’m going to be partying and drinking for 10 days straight, then doing a walk for charity. I’ve already informed one of my friends he will probably have to give me a piggyback ride for the majority of the walk. But hey – least I’m going to be able to sweat out a lot of toxins! I’m pretty sure anyone around me will get drunk from the sweat fumes!

Shit That Kept Me Sane In March:

The monthly segment in these articles where I talk about what multimedia brain mush kept me occupied for the previous month.

Video Games: I started Skyrim, and boy does it suck. Oh it starts off well – tons of quests, insanely addicting. Then you start to realize that for a game as large as Skyrim, it’s really incredibly linear, pointless and dull. None of the decisions you make have any real consequences or affect the storyline; and every quest is basically a “fetch” quest. This didn’t stop me from logging 40+ hours into the game though – but yeah, overall it’s a huge disappointment and I may not even finish it.

TV Shows: I’ve been watching The Walking Dead and Celebrity Apprentice as they air. It’s funny because I absolutely hate most reality TV shows – but I just love The Apprentice, although I prefer the regular ones(and of course the UK ones) to the Celebrity editions.

I think a large part of that is from a marketing standpoint, it’s fun to put yourself into the group and come up with your own ideas for a particular challenge etc. I was also recommended the UK version of The Mole but I could only find the US version and I watched season 1 of that. Quite the dated show, but still quite entertaining. Also got into Modern Family. I’d see bits and pieces of that show on TV and was not impressed – but then I sat down and actually watched it and thought it was a really awesome show. Watched Season 1-3 of that.

Movies: I watched Flight which overall I thought was pretty weak, however it had a stellar performance from Denzel so all is forgiven. Also Act of Valor which was pretty good and did a great job at the first person shooter POV. Finally I watched The Switch which was an absolutely dreadful romantic comedy starring Jason Bateman and Jennifer Aniston, who had anti-chemistry.

Books: Only read one book this month. Tried out the author Stephen Leather for the first time with his book Hard Landing. Really good stuff, and if you like the Mitch Rapp/Jack Reacher books you’ll like this.

If you’re sick of checking your analytics data and seeing that (not provided) BS ranking top of your keywords, then there are quite a few ways around it. There’s quite a few workarounds and hacks and this one does a pretty good job of it too. I’ve had a few people ask about that lately, so wanted to share.

Finally, we’ll end this week on a sad note, as Fortune Poker have announced they are closing down.

I was Fortune Pokers first ever affiliate, and it was completely by luck. I’d been working with Sporting Bet on the Boss network, and they decided to screw affiliates over and stop giving us commission. The Boss Network at that time was a well-kept secret; it was full of easy to clear bonuses, and crazy Turkish and Russian players who had absolutely no idea how to play poker.

I went looking for an alternative, and I started signing up at every Boss room I could find to determine the best one. Literally 10 minutes after e-mailing Fortune Poker and asking if they had an affiliate program(as they had a section that said it was launching shortly) James from Fortune e-mailed me back, and asked if he could call me. He called me, we talked – and I immediately picked Fortune Poker as my #1 room to promote from there on out. James was such an ambitious guy, but he also had his head on straight. He was one of those guys you just wanted to make money for.

Over the years, we became great friends and did a lot of good business together. I’ve told this story before but it just shows the personal level of customer service James would provide. One of my players, who most of you probably know – Jason “JCarver” Somerville – was trying to deposit so he could play at the high limit games, but the Boss Network wouldn’t let him deposit more than $10k in a 24 hour period.

JCarver wasn’t too happy, and I referred him to James. James told him “Go out, have a nice dinner. Get yourself a nice big juicy steak with all the fixin’s. When you come back, the deposit limits will be fixed for you, and let me know how much your dinner was and I’ll pay it for you.” And that’s exactly what happened.

It says something about people like James & Jenn that they managed to make Fortune Poker work for over 9 years. The Boss Network, especially in the latter years, is a cesspool when it comes to upper management. Just the most clueless people in the entire world, who have no understanding of business. And their rapid decline over the years is no surprise – the business decisions they’ve been making are just astounding, and it’s no surprise that Fortune Poker have decided to close things up.

Good luck in the future Jenn & James. It was a pleasure working with both of you, and becoming such great friends. I have only great memories from the last 9 years. Hell, I even wore a Fortune Poker shirt to a wedding! 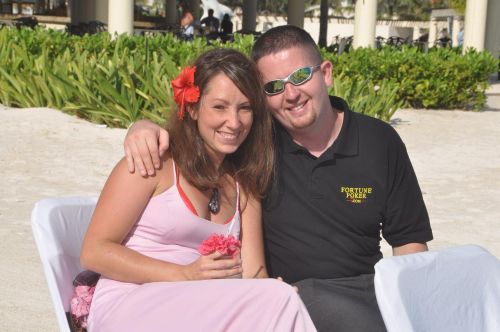 And with that – it’s about time to wake the kids up, send them off to school and have the house ALL TO MYSELF for the first time in 4 days.

This article was written on April 2, 2013 however all articles are looked at on a monthly basis and updated to keep them relevant.