Yikes. It’s been awhile since I wrote a T_IM on here. With good reason. I don’t really want to go into it, but basically a bunch of personal crap popped up around mid-November that’s kept me really busy and occupied. I couldn’t really focus on work that much, and when I did it was only the necessary stuff.

However the past couple of months have been a nice test for me. I always like thinking of “What if?” scenarios and then acting upon that. For example – what if I disappeared off the face of the earth for a month? It was good to see that for the most part everything ran smoothly.

Anyway I’m back now, and hope to continue the weekly T_IM articles.

We’ll talk about age at the end of this article.

Restaurants…stores….hospitals….so many of them these days allow you to access their wifi.

I’ve probably accessed over 100 of them all over Canada and North America.

Only ONE that I’ve seen has managed to get it right, from a marketing perspective.

See – offering Wifi is something that most places HAVE to do at this point. Search the likes of Tripadvisor and Yelp and you’ll see people complain about no Wifi, or praise them for having Wifi. So they have to offer Wifi at their own cost, and generally for no redeeming value other than the possibility of a positive review or to avoid negative reviews.

The other week, I went to a restaurant in town – Lone Star. I checked and they have Wifi. Excellent. I connected to it, and then it brought up my browser. But rather than bring it up and give me a list of terms and conditions…

Now there was a small skip check-in button at the bottom and I think you’d be able to click that and not have to check in. But seriously how brilliant is that? This place has figured out a way to actually get free bloody advertising and what I’ve always felt is one of the best types of marketing.

I LOVE seeing things like that, and I hope to see more ideas in the future.

What’s interesting is this is not the first time Lone Star have impressed me. It’s a big franchise in Ontario, and it’s cool how forward thinking they are. Another time, I happened to log in on Foursquare while I was in a restaurant in Toronto. Checked in, posted a picture of my food – you know the drill.

Well about 10 minutes later the MANAGER came over to me. And he’s like “Hey are you the guy that tweeted saying you were here?”. Yep that was me. “Awesome, we really appreciate that. We’re going to bring you and your kids dessert on the house”.

I love it. It’s really neat to see things like that – ESPECIALLY from a big franchise, when I find they are usually the ones that are lazy about adapting to social marketing, and when they do it’s only the bare minimum.

Do You Need A Logo?

Then create one yourself, at HipsterLogoGenerator.com

I love the freaking internet.

We’re going to end this article short of the usual length as honestly I’m a bit rusty when it comes to writing these.

First – it was my 34th birthday last Friday. I logged onto the computer and was greeted by this birthday logo from Google: 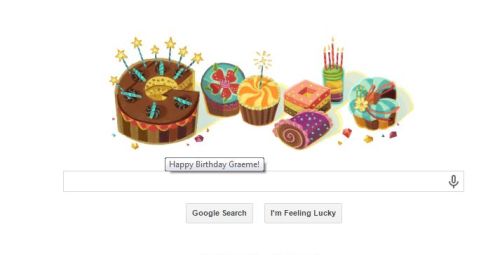 However I find age to be an interesting thing, or more importantly turning a landmark age. This is on the same wavelength as something I’ve been thinking about lately – New Years Resolutions.

One of my friends turned 39 a month ago. Of course, that means in one year he is turning the big one – 40. So like many people who turn 39 – he came up with a list of things he wants to do before he turns 40.

One month down the road, I asked him how much of that list he has accomplished so far.

Bucket lists, New Years Resolutions – it’s all the same; things that you are putting off. People act like it’s some sort of goal – and for a small percentage of people it probably is – but for the majority of people it’s just avoiding something, or an extreme level of procrastination.

And you know what happens? They ignore the lists, they break the resolutions and they realize they don’t care – that not going to the gym every day, or not working on that project they wanted to – it doesn’t really matter. Hey maybe they can try again next year.

In 1988, Nike came up with one of the most iconic phrases of our time. Just 3 simple words for their marketing campaign – yet it meant so much. It’s a mantra that people love and want to live by – and it’s something that you should.

I’m sure there’s a lot of things you want to do. So stop “resolving” to do it next year. Stop adding it to your “by my next birthday” list so that you can put it off for 365 days. And stop adding things to your “bucket list” when for all we know, you could kick the bucket tomorrow.

This article was written on January 26, 2015 however all articles are looked at on a monthly basis and updated to keep them relevant.